The Xfinity Series season is 17 races old and yet there’s only three series regulars locked into the playoffs.

Thanks to wins from eight different Cup Series regulars, only William Byron, Ryan Reed and Justin Allgaier have qualified for the postseason based on wins.

That leaves nine spots left to be filled on either race wins or points by the time the regular season ends in nine races.

Entering this weekend’s race at Indianapolis Motor Speedway, the drivers on the bubble are Blake Koch and Brendan Gaughan.

Below is the playoff grid through 17 races. 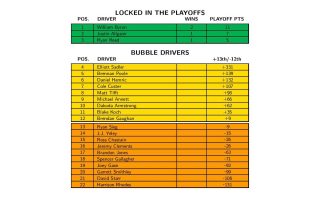 Though he hasn’t competed in the last five Xfinity races, the presence of Darrell Wallace Jr. is still felt in the series’ points standings.

Wallace last made a start for Roush Fenway Racing at Pocono on June 10, finishing the race fourth in points. But since then he has only fallen to 12th in the points standings.

This puts Wallace ahead of Gaughan, Ryan Sieg, JJ Yeley, Ross Chastain, Jeremy Clements, Brandon Jones and Spencer Gallagher, who have started all 17 races this year.

When this was noted on Twitter, Wallace gave his two cents in GIF form. 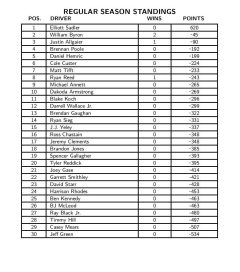