For as much as Joe Gibbs Racing celebrated Denny Hamlin scoring the organization’s first Cup win of the season and Daniel Suarez tying his career high with a sixth-place finish Sunday at New Hampshire, there was much to lament.

Matt Kenseth saw his chances to win end with a questionable pit call late. Kyle Busch’s hopes of victory faded when he was caught speeding twice in the final 65 laps.

Without the missteps from Busch and Kenseth’s team, Hamlin likely doesn’t win.

That’s the type of season it has been for Busch, who has found numerous ways to lose Cup races, allowing five drivers to score their first win of the season.

“This is another one I threw away for us,’’ Busch said on the radio to his team after the race Sunday.

Crew chief Adam Stevens replied: “We win as a team and lose as a team.’’

Busch is winless in his last 35 Cup races heading into this weekend’s event at Indianapolis Motor Speedway — site of his last Cup win.

There’s no doubt his car is fast enough to win. He’s led at least 95 laps in seven races since his Indy triumph a year ago but has yet to return to victory lane.

While Kenseth hasn’t had as many close calls, he can relate to miscues hurting him. He finished third at Atlanta despite two speeding penalties. He placed fourth at Bristol despite a speeding penalty.

Then came the pit call that cost Kenseth the win at New Hampshire and extended his winless drought to 36 races, a full season. When the caution came out on Lap 263, most of the lead field pitted. Kenseth led. Ratcliff called for a two-tire change. That got Kenseth off pit road first but the rest of the cars behind him took four tires.

Kenseth restarted alongside Dale Earnhardt Jr., who did not pit. Kenseth took the lead after the restart but could not hold off Hamlin, who quickly passed with his four fresh tires. Kenseth never had a chance at the lead the rest of the 301-lap race and finished fourth.

“I let you down,’’ Ratcliff said on the radio after the race. “We should have won.’’

The Gibbs teams are getting closer to winning. Just as Hamlin forecasted in April at Richmond.

“I think we are slowly getting better, we’re gaining more knowledge trying to figure out what it is that we need to work on,’’ Hamlin said at the time. “I think we’ve identified some areas where we need to work. It’s not going to happen overnight, it’s not going to happen this week, it won’t happen in a month. Some things are going to take a long time for us to get better at, but I’m very confident that when push comes to shove, we’re in September starting the (playoffs), we should be hopefully back where we were, if not better.’’

Hamlin notes that even with his win at New Hampshire, more work remains.

“I think we’re there except for two cars,’’ Hamlin told NBC Sports on Sunday. “(Martin Truex Jr. and Kyle Larson) are the only ones that continually beat us on speed. As far as the rest of the field, I feel we’re there on speed. Our teammate (Busch) has been like the third-fastest car and we’ve been the fourth consistently just about every week. We’re there where we need to be, but I still feel like for speed-wise, we need more to catch those two.’’

As the Gibbs cars contend for more wins, the difference will come down to execution and not making mistakes.

“There’s a lot of things we can do to be better,’’ Hamlin said. “We have a championship-caliber team. We just have to get our cars a little bit faster. I’m running laps out there as good as I feel that I can do. My car is doing everything that I need it to do but (Truex) is just faster.

“He’s running me down, and he’s passing and putting a straightaway on me. I’m thinking (crew chief Mike Wheeler) there’s nothing else I can give you. I don’t want to screw up our car and finish sixth. Just leave it where it is and hope those guys make mistakes.’’

Sunday, it was his teammates who made the mistakes and Hamlin took advantage. 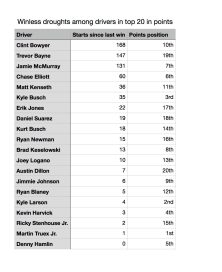