After repeat winners at Daytona and Kentucky, Denny Hamlin became the latest driver to win his way into the Cup Series playoffs Sunday at New Hampshire.

Hamlin, with his first victory of the season, is the 11th driver to clinch a spot in the 16-car field for the playoffs.

He would be the 12th if not for Joey Logano‘s Richmond win being encumbered due to an inspection failure.

If the postseason began this weekend, the drivers getting into the 16-car field on points would be Kyle Busch, Chase Elliott, Jamie McMurray, Clint Bowyer and Matt Kenseth.

With his win, Hamlin has seven playoff points. That puts him eighth on the playoff grid among those who have clenched a playoff spot. He is ahead of Kurt Busch (five playoff points), Ryan Newman (five) and Austin Dillon (five). 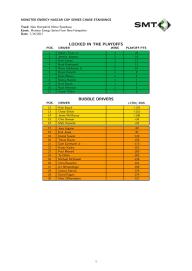