A rule change intended to help Xfinity Series drivers compete for more wins, particularly in the playoffs, has not diminished the domination of Cup drivers so far this season.

But they aren’t just taking the checkered flag.

NASCAR announced last year that Cup drivers with more than five full-time seasons in that series would be limited to 10 Xfinity races this year.

NASCAR stated that those drivers— Kyle Busch, Brad Keselowski and Joey Logano, among others — cannot compete in the final eight Xfinity races of the season and the four Dash 4 Cash races.

That means of the 33 Xfinity races, veteran Cup drivers are not allowed to compete in 12 events. That leaves 21 races for them to compete in up to 10.

With fewer opportunities, veteran Cup drivers have been running — and excelling — in more of the same Xfinity races this season. That’s left Xfinity drivers with limited chances to score a top-five finish.

That trend likely will continue.

They cannot compete in the Xfinity Series after the Sept. 8 race at Richmond International Raceway, giving Xfinity regulars a better chance to win in the playoffs. But those Xfintiy drivers still will have to beat some Cup competitors.

Cup drivers with less than five full-time seasons in that series are allowed to race in the Xfinity playoffs. That means that Kyle Larson (three wins this year), Erik Jones (two), Ryan Blaney (one), Austin Dillon, Ty Dillon, and Daniel Suarez will be able to race until the finale in Miami.

The Xfinity Rule Book states that any driver who scores points in the Cup series is not eligible to run in the Xfinity championship race in Miami.

Even with the Cup veterans limited, Xfinity rookies William Byron and Cole Custer say they are learning when they race them.

“We have a great opportunities to go out there and succeed,’’ Byron said. “I’ve got good race cars, everyone is in good equipment, so when you have that you have to make the most of it and be around some veteran guys and not make mistakes and make a fool out of yourself. Just try to do the most and … learn from all the guys out there.’’

Byron has won two races, scoring victories at Iowa Speedway, a standalone race that did not have any Cup drivers in the field, and at Daytona International Speedway, which had four Cup regulars in the field.

Custer seeks his first win but has finished 11th or better in five of the last seven races.

“We all have really unbelievable opportunities to try to run good and make a name for ourselves,’’ he said. “You’re just trying to learn every single weekend, learn from the veteran guys.’’

Those lessons should prove helpful in the Xfinity playoffs, which begin Sept. 23 at Kentucky Speedway.

With Busch, (two wins this year), Logano (one), Keselowski (one), Denny Hamlin (one) and Aric Almirola (one) all among those ineligible to run in the playoffs, there could be more chances for Xfinity regulars to win.

Suarez won the season finale and the championship last year with many Cup drivers ineligible to compete.

“We talked about it for a long time,’’ NASCAR Chairman Brian France said last year of limiting Cup drivers in Xfinity races. “I’m glad we did it. It got a very worthy champion in Daniel Suarez.’’ 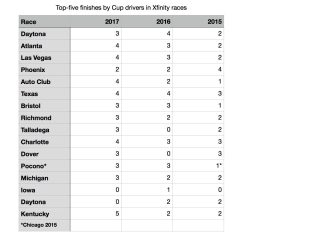