For most of his life, two simple yet profound words have defined him: The King.

Richard Petty hasn’t just been part of NASCAR for more than 50 years, he’s been its unchallenged, unanimous King.

Without question, Petty is the most prolific racer the sport has ever seen: 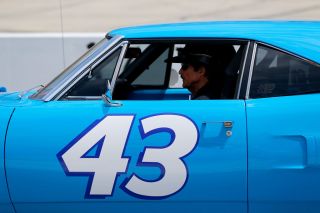 He was the first to win seven championships in NASCAR’s premier racing series.

He made an incredulous 1,184 starts over 35 years of racing. No one else has come close.

That means Petty finished 10th or better in just under 64 percent of his starts.

He also was part of the first class to be inducted into the NASCAR Hall of Fame, chosen along with four other individuals – Bill France Sr., Bill France Jr., Dale Earnhardt and Junior Johnson – who had the biggest impact in building the sport into what it has become.

While Petty retired as an active driver in 1992 at the age of 55, he traded in his helmet for his trademark Charley One Horse cowboy hat, continuing on at the helm of one of the most iconic teams in NASCAR history, the aptly-named Richard Petty Motorsports.

Which brings us to today, a most special day indeed, one that by NASCAR terms should be the equivalent of a national holiday:

To fete Petty’s milestone birthday, NASCAR Talk brings you comments from Petty’s media conference Friday at Daytona International Speedway, as well as several of today’s top drivers on the influence he had on them.

First off, King, how has the sport changed from your driving days to today?

“The only thing that’s the same about racing is they throw the green flag when they start and the checkered flag when it’s over,” Petty said. “Everything else is different.

“So you can’t compare apples and oranges. It’s a deal that a lot of us have been fortunate enough to lead the pack at a different time, but I don’t see any one of the leaders being above the rest of the crowd, that’s just what it took to get us where we’re at.”

RPM is an extension of what began as Petty Enterprises 68 years ago in 1949 in Randleman, North Carolina. It was founded by Lee Petty and his two sons, Maurice and Richard, who was 12 at the time.

Even though Petty Enterprises folded after the 2008 season, it regrouped and reformed the following season in a merger with Gillett Evernham Motorsports, being rechristened Richard Petty Motorsports.

RPM has struggled at times over the years, including dropping to a one-car operation for 2017 (although it has hopes of returning to a two-car operation perhaps by 2018 or 2019).

Some wonder that with Petty now turning 80, what will the future of RPM be.

“As long as I’ll be here, there’ll probably be one,” Petty said. “I don’t know if Kyle wants to take up the mallet or not.

“It’s just an idea that everybody goes through ups and downs, ins and outs. NASCAR, all the rule changes, points standings, they’re trying to do everything they can to upgrade and bring back spectators.

“Well, we’re doing the same thing only we’re struggling making sure (sponsor) Smithfield signs up for another year, and Air Force does, and we have to deal with the race car and all the people, so it’s a never-ending deal.

“If you talk to me or talk to any other teams, everyone is up in the air at this time of year most of the time trying to figure out where are we with what can do next year.

“Right now, things are looking decent (for the near future). I won’t say they’re looking great or looking bad, but we’re in the middle of some transitions deals here and should be in pretty good shape.”

Dale Earnhardt Jr. has been voted NASCAR’s Most Popular Driver the last 14 years. But if you look over Petty’s 68 years in the sport, it’s hard to disagree he’s not been the sport’s most popular personality during that time. 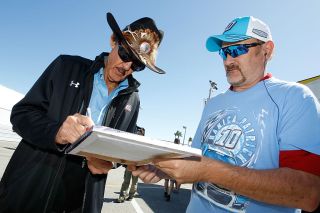 “I think somebody figured the other day that probably (signed) close to 2 million autographs over a period of time,” he said. “That’s a bunch of autographs, but that’s still thank you.

“Those are the people who put me in business and the reason you’re here. If it wasn’t for the fans, you probably would have to go to work for a living.

“I have a lot of people come up who say my granddaddy used to come, my dad come, my dad brought me to the first race, I’m still coming. It’s still a way to get new fans and new things going on.”

The future of the sport, where it’s been and where it’s going, is on Petty’s mind both today and what it will eventually come to be when his final legacy is written.

“You’ve got to figure there is so much going on for young people, old people,” he said. “Nobody’s got time to sit for 4-5 hours and watch races anymore. If it lasts more than 15-20 minutes, we’re going to get our Google machine out and start punching buttons and doing something else.

“The deal there is keeping as many fans as we can, but the big deal is all those fans that used to be Richard Petty fans, there is always Richard Petty, so they’re not going to be able to come anymore.

“So how do we tap into those people to keep our sport alive? It’ll take everybody to do it. Takes (the media) to do it, takes us to do it, takes NASCAR, takes TV, takes everybody in order to get to the people. There are 330 million people out there, we ought to be able to get to 50-100,000 every weekend. That’s what it’s going to take.”

In addition to being a fan favorite, Petty has influenced countless drivers in the sport over the last seven decades.

We asked some of NASCAR’s present stars what impact The King had upon their own racing careers. Here are their thoughts: 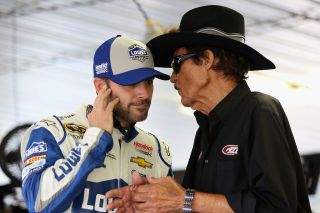 Jimmie Johnson: “It was ’85 or ’86, I went to Riverside and saw him come through in that Petty blue car through the esses. I knew who he was but that certainly left a lasting impression in my mind to see him in person, The King. That’s a point in time when I think there was only Elvis Presley was the King, we didn’t have LeBron James.

“I saw The King in action, which was really, really cool. As my career progressed into NASCAR racing, I was around the Petty family quite a bit, competing against Adam Petty in the ASA ranks and Busch Grand National. I feel very, fortunate to be able to get to know him on a different level, also Kyle and Adam and that whole time was a lot of fun.

“Even though Adam and I were very competitive against one another on the track, (the Petty Family) treated me with open arms and were very kind and giving and I think that just speaks to the people they are and honestly, just the way Richard is in general. I also feel that we’re very fortunate to have King still in our sport.”

Brad Keselowski: “You don’t get the nickname the “King” for nothing. He’s leaving a legacy that won’t even be touched by any other driver. Maybe even any athlete in the sports world. I would put him on par with Arnold Palmer, Jack Nicklaus and all those guys. What they’ve meant to golf.

“You still see him promoting the sport with different things whether it’s when NASCAR goes to the White House or trips to New York or any of those things. He’s active with the Hall of Fame. Twenty-five years later!

“I don’t know where I’m going to be when I retire, I hope it’s a long way off. But I doubt that I will still be here every week. Let alone from all the success that he’s had on the race track, there’s just so many facets to his legacy that I feel bad sitting up here and trying to talk about it because I know that I’m missing so many pieces because of everything he’s meant to the sport. We’re lucky that he’s in our sport and not in another sport.” 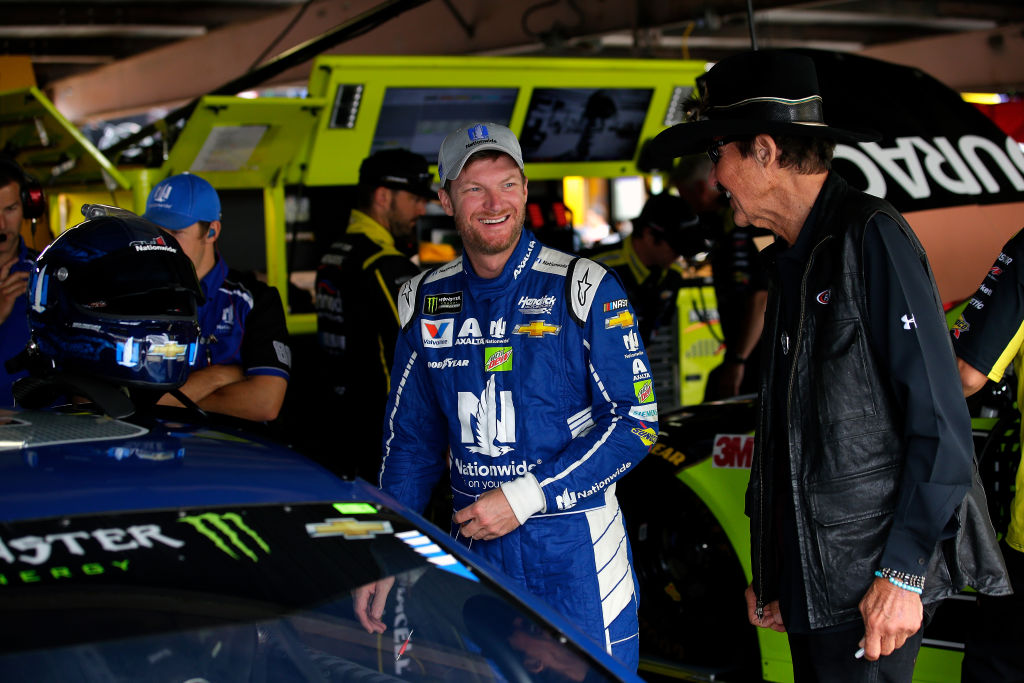 “He’s seen it all, and he was a part of it all. And he was successful throughout that entire time. He showed all the drivers how to work with fans, how to treat everybody with respect — how to sign every autograph.

“That was the whole thing about Richard — first thing I heard is he signs every autograph. And that’s how it’s going to be: If you are going to be a race car driver, that’s the way you need to do it.

“There are certain people in certain sports that are remembered for leaving their mark, and nobody left a bigger mark than Richard.”

Petty’s legacy has arguably transcended anyone else in the history of the sport. Sure, you can make an argument for the sport’s founder and his successor – Bill France Sr. and Bill France Jr. – but when it comes to any other driver, team owner or crew chief, no one can beat the king for legacy, longevity, success and popularity.

Even the sport’s youngest stars, many who weren’t even around when he was racing, know the impact The King left upon the sport – and continues to leave.

Chase Elliott: “I remember him being around the race track when Dad (Bill Elliott) was racing full time and we were coming to the track every weekend. I remember him still being very involved.

“The biggest thing with him over the years is the guy hasn’t changed a bit. You see him in the garage, he is over there poking at tires, looking at cars and walking over, seeing what you’ve got in your car, knowing you are not going to tell him no. He is going to come over there and check it out anyway. 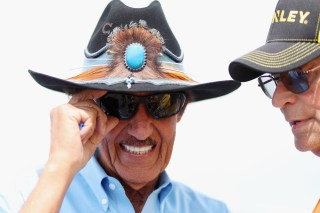 “Awesome guy. Certainly a great ambassador for our sport. You don’t see many people who had the career he had have that still come to the race track and show the passion he does every weekend. That’s pretty cool. Happy birthday to him. 80 years is pretty cool.”

Indeed, 80 years really is pretty cool. Happy birthday, King. May you have 80 more.