With each race Kyle Busch fails to win, his chances of capturing a second Cup championship becomes more challenging.

Busch has led more laps than every driver this season except Martin Truex Jr., but is winless, costing him valuable playoff points and possibly a title.

The new format rewards those who excel throughout a race and punishes those who don’t or encounter trouble at key times.

That’s a painful reality for Busch, who has lost the lead four times in the final 15 laps this season.

But that’s just some of Busch’s heartbreaks.

He lost a top-five finish at Las Vegas after contact with Joey Logano on the last lap, finished 22nd and suffered a cut forehead in a scuffle on pit road afterward. A commitment line violation with less than 25 laps left cost Busch a chance to win at Richmond, relegating him to 16th. Austin Dillon beat Busch on a fuel-mileage gamble to win the Coca-Coal 600.

It’s easy to see that Busch could have at least three to five wins this season, likely giving him more playoff points than any other driver.

Instead he has scored four playoff points — one point each for his four stage wins. 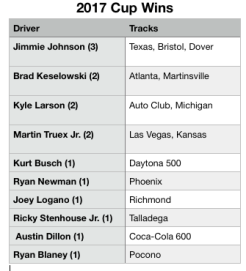 If the regular season ended today, Truex would be second in the season standings and gain 10 bonus playoff points, giving him 31 playoff points.

If the season ended today, Busch would have 11 total playoff points, including seven bonus points for finishing fourth in the standings. Under this scenario, Busch would start the playoffs 20 points behind Truex.

That difference could be critical with playoff points staying with the driver until they are eliminated or reach the season finale in Miami. Playoff points don’t carry over for the final four teams vying for the title there in November.

Busch might need to win in the playoffs, automatically advancing to the next round, to keep his title hopes alive if he continues to lose bonus points to his competitors

While Busch seeks his first victory this weekend at Daytona International Speedway (7:30 p.m. ET Saturday on NBC), there’s a furious battle for the points lead.

In previous years that wouldn’t matter, but those bonus points change things.

Kyle Larson has a 13-point lead on Truex in the season standings going to Daytona and admits he’s keeping a close eye on Truex.

“The regular season points have been a big priority of mine because it pays 15 points to be the leader at the end of Richmond,’’ said Larson, who has victories at Auto Club Speedway and Michigan International Speedway and five runner-up finishes this season. “(That) is a big deal, it’s like winning three races. (I’m) trying to stay as consistent as I can and race hard every race.

“I think in the previous points format if you get a win early on you can kind of cruise a little bit and lose your drive on wanting to win as much. Now, with the bonus points on the line every week, it is a big deal to run up front all throughout the races.”

There is just as intense a battle for the final playoff spots.

With 10 spots filled, six spots are left for the playoffs. If the playoffs started today, those six spots would be filled (based on points) by Kyle Busch, Chase Elliott, Hamlin, Jamie McMurray, Logano and Clint Bowyer.

When the playoff format and stage points were announced before the season, Bayne knew his Roush Fenway Racing team would face quite a challenge.

“When they laid out the stage points, I said, ‘Man, this is really going to hurt us particularly when we run 15th because we’re not accumulating points,’” said Bayne, whose team has improved its average finish 2.6 spots to 17.3 this season. “We don’t have the ability right now to run top five.’’

Unable to finish stages in the top 10 has impacted his team. Bayne has 15 stage points. Kenseth, the first driver outside the playoffs, has 82 stage points. That difference has helped Kenseth build an 86-point lead on Bayne in the season standings.

“We know we have to win to get into the (playoffs) at this point,’’ Bayne said. “I can go out there and lay it on the line like I could do in the 21 car when we ran a part-time schedule. I maybe got a reputation for being a little erratic and wild but that’s because I had no points on the line. You go out there to win. If you wreck, you wreck. If you win, you win. That’s the situation we’re in now.’’

Logano also feels the pressure. He leads Kenseth by 11 points.

“It is on my mind,” Logano said of having a encumbered win that doesn’t qualify him for the playoffs. “I would be lying if I said it wasn’t, but it isn’t something I am very concerned about. I feel like this team is strong enough to get through it. We just need to get through it, build momentum.

“The way these stages are, you can gain points pretty quick. We have proven we can lose them pretty quick. A couple good races of scoring stage points and a great finish will put you right back to close to where we were. We have to be able to string three or four solid races together like we know how to.’’

Season by the Numbers

2 – Wins by Richard Childress Racing, the most since 2013

10 – Races left until the playoff field is set