After a brief absence, Martins Motorsports is returning to the Camping World Truck Series this weekend at Iowa Speedway.

The team will field the No. 42 Chevrolet with driver Matt Mills.

Martins Motorsports shifted its focus to the Xfinity Series earlier this year and sold the rights to its No. 44 to Faith Motorsports. 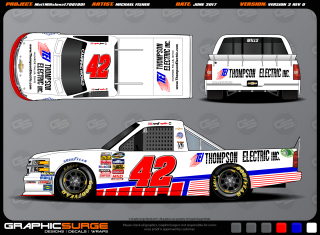 “It’s been a weird year,” said driver and team spokesman Tommy Joe Martins in a press release. “So much has changed for our team in just one year. The Truck series has shifted dramatically. But I think we’ve found a good direction for Martins Motorsports. We’re at home in the Truck series. We want to be a platform for guys to take their first step in NASCAR – just like I did.”

Mills will be making his fourth Truck start of the year. His first three, at Kansas, Charlotte and Dover, were with Faith Motorsports. The 20-year-old driver finished 17th at Kansas and Dover. He finished 24th at Charlotte.

Martins Motorsports has made 29 Truck starts since 2009. Its only starts this year were at Atlanta with Martins and at Martinsville with Brandon Brown.

“We know we’ve got a chance to go out and compete for top-15’s consistently with Matt driving our trucks.” Martins said. “The relationship he’s formed with our crew chief Kevin Eagle is also going to give us a big head start on unloading fast. We want to give Matt as many opportunities as we can.”

The team hopes to compete in “several” of the remaining races in the Truck season, but a final schedule is not set.