Mac and cheese will be on Ryan Newman’s menu and also on his No. 31, as Velveeta Shells & Cheese will become a sponsor on Newman’s Richard Childress Racing Chevrolet.

The new partnership was announced Wednesday. Velveeta’s Liquid Gold brand will serve as a primary sponsor on Newman’s car for a number of races this season, starting with next week’s Cup race at Michigan International Speedway. 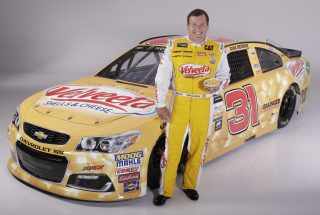 When it is not primary sponsor for a race, Velveeta will serve as an associate sponsor on Newman’s car for the rest of the season.

The new partnership will also include a national sweepstakes that will award one fan with an all-expenses paid VIP trip to Ford Championship Weekend at Homestead-Miami Speedway, as well as awarding select NASCAR fans with Newman-autographed items.

Velveeta and parent company Kraft Heinz Co. join several other sponsors on the No. 31 Chevy, including Caterpillar, Grainger and Kalahari Resorts & Conventions.

Newman is currently 15th in the NASCAR Cup standings. His win at Phoenix earlier this year locked him into this year’s Cup playoffs.