Leavine Family Racing will honor the New York City Fire Department (FDNY) with a FDNY Foundation paint scheme on the No. 95 Chevrolet driven by Michael McDowell for this weekend’s Pocono 400.

While the FDNY has worked with NASCAR in the past, this will be the first time it will be featured on a race car. 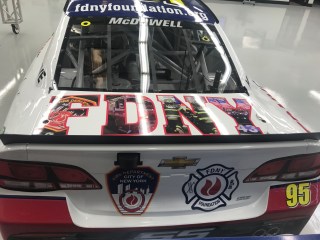 Leavine Family Racing co-owner Mat DiLiberto is a board member of the FDNY Foundation.

“We have the opportunity to increase awareness of the ways we support the critical, life-saving mission of the FDNY because they have offered to place our logo on their car as it races in the Pocono 400,” Stephen Ruzow, Chairman of the FDNY Foundation Board of Directors, said in a media release.

Added DiLiberto, “The NASCAR community has a deep respect for those who give of themselves for the greater good and the men and women of the FDNY exemplify heroism. Showcasing the FDNY Foundation, which supports the FDNY in so many ways, is truly an honor for me and for all of us at LFR.”

McDowell has taken the No. 95 to three top-20 finishes in a row, the team’s best streak of finishes in their Cup existence.

“The good thing about Pocono is there is a lot of strategy,” McDowell said. “And also the track is so long that you’re not really fighting to stay on the lead lap, so you can be pretty aggressive with your strategy. That makes for a lot of fun during the race and some crazy restarts.”