NASCAR and the Verizon IndyCar Series will both honor former driver John Andretti next weekend with decals that raise awareness about getting colonoscopies after the former driver was recently diagnosed with Stage 4 colon cancer.

All cars in the Indianapolis 500 and Coca-Cola 600 will have the decals, which are headed with the hashtag “CheckIt4Andretti.”

Andretti, 54, was the first driver to attempt “The Double” of competing in the Indianapolis 500 and Coke 600 in the same day. 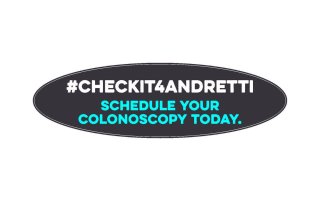 Andretti was at Indianapolis Motor Speedway Thursday for a press conference to update his cancer battle and discuss the importance of getting colonoscopies.

“I turned 50 several years ago, and every year I get a physical, and I go through and I understand what’s happening,” Andretti said. “One thing I was always lacking was a colonoscopy, and you would ask about it or whatever, and I’d forget about it. I never avoided it. It just didn’t happen.

“And unfortunately my wife has an issue that she has to go get them several times. And so she was in getting hers, and I decided to schedule mine. … But I was about three minutes away from walking out of the next doctor’s office because patience is not my strong suit. And so fortunately I didn’t, and immediately after the colonoscopy, they scheduled a surgeon. I was in surgery a few days later to have a tumor removed and another cancer spot. Unfortunately, the tumor had spread outside the colon.”

The initial surgery removed 12-14 inches of his colon and scans showed the cancer had spread to his liver and possibly his spleen. Doctors don’t know for sure because spleens can’t be biopsied.

“It’s been a struggle, but the people around me have made it really — you know, much easier, the prayers and everybody that’s reached out to me,” Andretti said.

A two-time Cup winner, Andretti said his cousin Michael Andretti and others underwent a colonoscopy after he told them he wouldn’t go public with his ailment unless they did.

“I figured I’d never get him to go so I would never have to go public with it, and two weeks later he’s doing it,” John Andretti said. “He fought a little bit, but he didn’t fight hard.”

The special decals are not the only way Andretti and his cause are being honored in the NASCAR world. This weekend, the No. 34 Ford of Landon Cassill will have #CheckIt4Andretti logos on it.

“John was the original driver of the No. 34 when Bob Jenkins first ran the car full-time in the Cup series, and he’s still a good friend of Bob’s and a friend of the team,” Cassill said in a press release. “We’re all thinking about him as he battles colon cancer, and we want to help spread his message. He’s been using his diagnosis as a platform to encourage everybody to go to the doctor and get checked, and we’re happy to help spread that message in his name.”