May 1985 was an interesting time in American and NASCAR history.

As the month opened, the musical achievement of “We are the World” by U.S.A for Africa (AKA 45 artists including Michael Jackson, Lionel Richie, Ray Charles, Diana Ross, Bruce Springsteen and … Dan Aykroyd) was in its fourth and final week atop the Billboard Hot 100.

In cinemas, the Chuck Norris film Code of Silence (“Eddie Cusack is a good cop having a bad day”) had opened as the No. 1 film.

And in sports, some guy named Bill from Dawsonville, Georgia, was in the process of making himself a household name.

At 29, Bill Elliott and the No. 9 Coors Light Ford of Melling Racing had won three of the first eight races of the Winston Cup season, including the Daytona 500. As the Winston Cup Series rolled in to Talladega, Alabama, Elliott was fourth in the standings, 81 points behind leader Geoffrey Bodine.

In its first year of existence, Elliott was aiming to win the “Winston Million.” If a driver won three of four races – the Daytona 500, the Winston 500, the Coke 600 at Charlotte Motor Speedway or the Southern 500 at Darlington Raceway – they’d win $1 million.

There’s one big difference between a race at Daytona and Talladega in 1985 and 2017: restrictor plates. The metal plate that bunches fields together and regularly causes “The Big One” today was still three years away in 1985.

The driver with the fastest car could literally run away, hide from the rest of the field and lap them a few times if lucky.

That’s the way the world was May 5, 1985. Bill Elliott sat on the pole and Cale Yarborough’s No. 28 Hardee’s Ford was second. Only 39 cars started the race (after Greg Sacks pulled out for engine problems). It was the smallest Talladega field ever at the time.

All of the following YouTube videos in this post combine race footage with radio broadcast by MRN Radio. They’re heavily edited, condensing the two-hour and 41 minute race to about 60 minutes.

Barney Hall, Mike Joy and Danny Sullivan were on the call and Dr. Jerry Punch and Ned Jarrett were in the pits.

At the drop of the green, Yarborough quickly assumed the lead, followed by Kyle Petty as Elliott fell back to fifth.

Elliott would take the lead for the first time on Lap 6 and would lead the strung out field for 22 circuits of the 2.66-mile track. Then on Lap 28, a fellow named Dale Earnhardt would take the lead. The 35-year-old driver had already won at Talladega twice, in the fall of 1983 and 1984. Spoiler alert: he wouldn’t win there again until 1990, three years into his sponsorship deal with Goodwrench.

Around Lap 37, the leaders begin pitting for the first time. Pit road in 1985 was a very different place. A speed limit didn’t exist (and wouldn’t until 1991 following the death of crew member Mike Rich in an accident in the 1990 finale) and pit stops went by at leisurely Sunday pace.

Leader to the Rear

We have a development! Around Lap 48, with Earnhardt leading Richard Petty, Elliott had just taken third from Yarborough when smoke erupted from his No. 9 Ford on the frontstretch. Elliott was able to make it back to pit road. The hood went up on his car.

“If it is indeed engine trouble, it would be the first time since 1982 that the Elliott team has lost an engine in a Grand National stock car race,” Mike Joy informed listeners.

It would turn out to be a problem with the oil pump. Which is funny given the “Melling Oil Pumps” logos on the car’s rear quarter panels.

“I about kissed everything good bye because I didn’t know what happened when it started missing there,” Elliott said in 2015. “But, they raised the hood and got it fixed faster than I thought they would. It felt like I sat there six or 10 laps.”

According to book “NASCAR: The Complete History,” Elliott returned to the track in 26th, 2.03 seconds from going two laps down.

If I know my NASCAR, Elliott’s day was clearly done, folks. 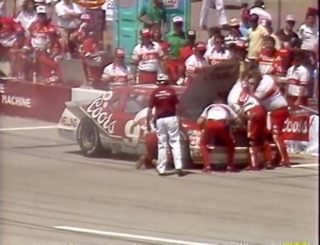 It wasn’t over, folks.

Fifty-four laps were complete in the Winston 500 when Barney Hall gave listeners an update.

“That five-car draft has broken away from the rest of the field and Bill Elliott continues to drive away from the now leader Cale Yarborough. A moment ago the interval was about three seconds, he was in danger of going two laps down, but now he’s going to make sure they do not catch him.”

An Era of Attrition

If you look at a post-race report from Talladega or Daytona today, either half the field will be eliminated or only three cars won’t make it to the end. It’s a toss-up.

In 1985, a valve issue made Richard Petty the 13th driver to end their day in the garage. By race’s end, just over half the field, 20 cars, were out. Just one was eliminated via a crash.

Eventually, Elliott swept underneath Yarborough to get his lap back in Turn 1. Elliott was able to do all of this without the aid of a caution.

On Lap 145, Elliott used the draft to again surge by Yarborough going into Turn 3 to take the lead.

A caution finally appeared with 28 to go as Bodine smacked the wall out of Turn 4. In the pits, Yarborough beat Elliott off pit road.

On Lap 169, Elliott once again charged by Yarborough to retake the lead. The moment is marked by a loud cheer heard over the MRN broadcast. It’s reminiscent of the many times an Earnhardt would take the lead at the track.

Fourteen laps from the finish, the final caution waived for the one-car crash of Eddie Bierschwale.

The field would pit with Elliott winning the race off pit road. But during the potentially race deciding pit stops, one team that was out of the race took that moment to push their car back up pit road as cars exit their stalls, including Elliott’s. During a previous pit stop, a camera man could be seen standing in the infield grass as cars zoomed by. 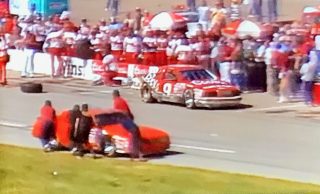 The final restart came with 10 to go and Elliott leading.

The closing laps would be decided by Elliott, Yarborough and Kyle Petty. This is significant because they were the only cars on the lead lap.

The last time a restrictor-plate race ended with 10 or less cars on the lead lap was the July 1995 race at Talladega (nine cars).

Petty’s performance was aided by the fact that fellow Ford driver Elliott had given the Wood Brothers Racing his exact chassis set up that weekend.

When Elliott took the white flag, no one was within striking distance of the No. 9 Ford. There would be no draft induced last-lap heroics. Ninety-seven laps after his unexpected pit road visit, Elliott won the Winston 500 by 1.72 seconds over Kyle Petty.

“If Bill hadn’t helped us, we wouldn’t have been able to finish second,” Eddie Wood said. “And when someone puts on a performance like he did, making up two laps under green, they deserve to win.” 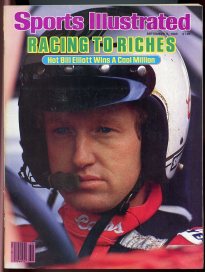 Two races later, in Charlotte, Bill Elliott would fail to clinch the “Winston Million” when a mechanical problem caused him to finish the Coke 600 in 18th.

But come September, Elliott became the first of two men to ever claim the $1 million prize when he won the Southern 500.

In addition to the money, the achievement put Elliott on the Sept. 9 cover of Sports Illustrated.

The “Winston Million” would not be awarded again until 1997, when Jeff Gordon won it in its final year of existence.

Elliott would continue to have speed at Talladega. The 1985 Winston 500 was the first of six-straight poles for Elliott at the superpeedway. But his second and last win in Alabama wouldn’t come until the fall 1987 race.

In 1985, Elliott and his No. 9 team would win 11 times, the most in Elliott’s 37 years of Cup competition. But thanks to late-season troubles, the title went to Darrell Waltrip, who only had three wins, but more top fives and top 10s than Elliott.

Elliott’s first and only Cup title would not come until 1988.

The car Elliott drove to his 1985 win was placed in Talladega’s museum the next year. In 2015, it was started for the first time in 30 years as Elliott drove hot laps around the track to commemorate the race’s anniversary.

Whatever happened to: Melling Racing

Harry Melling’s involvement in NASCAR began in 1979 as a sponsor of Benny Parsons. In 1981, the tool manufacturer was also a primary sponsor of the Elliott families’ racing efforts. But in 1982, Melling bought Elliott’s team and made it his own. Together they became one of the dominate forces in NASCAR in the 80s, winning 34 races from 1983 to 1991.

In 1992, Elliott left the team to race for Junior Johnson. Melling Racing would compete on a part-time basis for the next three years before fielding the No. 9 SPAM Ford for Lake Speed in 1995-1996. Speed drove for Melling through 1998. Jerry Nadeau then drove the No. 9 Cartoon Network Ford from 1998 – 1999.

The week of the 199 Coke 600, Harry Melling died of a heart attack at 53. His son Mark took the reins of the team, which competed in 81 more races through 2002. In January 2003, the team ceased operations after failure to secure sponsorship.

While its last race was in August 2002 at Michigan, the team had one last moment of glory seven starts before that with Stacy Compton. On Oct. 21, 2001, a day remembered for Dale Earnhardt Jr.‘s first win at Talladega, Melling Racing began the race in a familiar spot at the superspeedway – the pole position.

This is the second in an occasional series looking back at classic NASCAR races (at least those that are on YouTube).