The only thing more amazing than legendary short-track racer Red Farmer continuing to race regularly at the age of 84 is that he continues to win.

Recently named one of 20 nominees for the NASCAR Hall of Fame Class of 2018, Charles “Red” Farmer is doing anything but slowing down in his golden years.

Instead of sitting in a rocking chair, he’s behind the wheel of his Late Model and still putting racers 60 or more years younger than him to shame.

Farmer’s favorite track – and one he competes on most weekends from April to October – is the Talladega Short Track, a 1/3-mile dirt track across the street from Talladega Superspeedway.

“I look forward to Saturday every week because I know I’m going to go and race in my car and run,” Farmer told NBC Sports.

But don’t think that because of his age, Farmer is a start-and-park driver.

Farmer finished third in the standings last season at Talladega Short Track. He led the points the first 10 weeks before he had to skip a couple of races. Had he not missed those two races, he likely would have won the track championship. 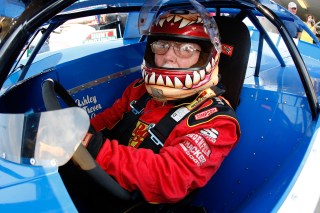 When he was discharged from the hospital on a Wednesday, his doctor told Farmer not to drive anything for 48 hours. Obviously, his doctor forgot Red was a racer, Farmer said, laughing as he related the tale.

“But they didn’t say nothing about me racing on Saturday night,” Farmer chuckled.

“I won the heat race, had a front row starting spot in the feature, but I didn’t think running the whole race would be too smart,” Farmer said. “I had a little bit of pain in there when they had the tube in me.

“They said if I started bleeding again, that I’d have to go to the emergency room. I hated to give up the front row start because the car was so good, but I let a buddy of mine – Chris Mullenix – drive for me. They put him to the rear. It was hard to give up. That’s the way racing goes. Sometimes, it doesn’t wind up like you want it to.”

Farmer then described the heart procedure he underwent in another humor-filled manner.

ONE OF THE MOST REVERED RACERS

But the biggest honor Farmer feels he’s ever received was “when I was voted one of the 50 Greatest Drivers in NASCAR history in its 50th year (1998). That was quite an honor to be in that top 50.

“But all the other great drivers in there – Lee and Richard Petty, Buck and Buddy Baker, Junior Johnson, Ralph Moody and all those guys that made that 50 Greatest Drivers list, I raced against all of them at one time or another. It was quite an honor, it really was.”

But soon, Farmer potentially could earn what would be the biggest honor of his 70-year racing career: possible induction into the NASCAR Hall of Fame.

“It was a great honor to be able to get in that top 20, that short list,” Farmer said. “I’ve been a NASCAR member since 1953 when I ran out on the beach course in Daytona. There’s an awful lot of good people on that list, that’s for sure.”

“This would probably be the ultimate. It’s like the star on top of the Christmas tree. It’s a great honor to be in the other Halls of Fame, but this one here (NASCAR Hall of Fame) is the ultimate. It’d be a big honor if I get elected.”

While he’d welcome induction into NASCAR’s Hall, it would be sweeter if something else also happened.

“The only thing that would make it better is if Davey (Allison) and myself both got in it together at the same time,” Farmer said. “That would be unbelievable, really.”

Farmer and Davey Allison, son of NASCAR Hall of Famer Bobby Allison, were very close. Farmer was injured in the same helicopter crash at Talladega Superspeedway that claimed Davey Allison’s life in July 1993.

Like Farmer, Davey Allison is in his first year as a NASCAR Hall of Fame nominee.

“Davey was like a second son to me, and I worked as his crew chief and car chief for about eight or nine years in the (Busch) Series,” Farmer said. “That would probably be the ultimate right there, if me and Davey both went in together. But if we don’t, I hope he gets in anyway, and maybe I’ll get in later. We’ll just have to wait and see.”

Farmer still lives in Hueytown, Alabama, about an hour west of Talladega, in the same house he’s lived in over 54 years.

The love of Red’s life, wife Joan, died in June 2015, a week after the couple celebrated their 65th wedding anniversary.

But family is still at the center of Red’s life, as he races regularly with grandsons Lee and Matt Burdett at Talladega Short Track.

Why does he keep racing?

“It’s hard to explain unless you are a driver, but it’s like people that get up with playing golf or bowling or hunting, anything that they really love to do,” Farmer said. “I’m still competitive, that’s the main thing. As long as I can be competitive and race with those youngsters.

How long will Farmer keep racing?

“As long as I’m competitive and still have good health, I’m going to run,” he said.“I don’t have a timetable, but I figure if the time’s right, then I’ll quit.”

Farmer was part of NASCAR’s original Alabama Gang that came out of Hueytown in the mid-1960s, along with brothers Bobby and Donnie Allison.

“When we were running as the Alabama Gang with Bobby and Donnie, back in the 60’s, we ran 106 races in one year,” Farmer said. “We were pulling the cars all over in an open trailer behind a pickup truck and we ran all over the country.”

Although Bobby and Donnie took to the Grand National Series, Farmer decided to do what he did best – race on short tracks.

How many races Farmer has won in 70 years varies widely. Because records weren’t as well-kept as they are today, estimates of Farmer’s trips to victory lane range between 600 to more than 900 wins. And then there are countless match races he won.

And though he competed in just 36 NASCAR Grand National races (0 wins, 2 top-fives and one other top-10) in his career, his legendary NASCAR short-track prowess landed him on the 50 Greatest Drivers of NASCAR list in 1998 and also contributed to his NASCAR Hall of Fame nomination.

Farmer, whose age has often been in dispute, said he was born in 1932. He drove in his first race in 1948 – and has been going virtually nonstop ever since.

“My first race was Opa-locka, Florida in 1948, on an abandoned Air Force base,” Farmer recalled. “There were two parallel landing strips. We’d run down to the end of one, turn left and go through the dirt and grass, get on the other strip and run down to the other end and turn left again on the grass and dirt. They eventually made it a real racetrack two years later.

“That’s where we started. We just kind of made our own racetrack.

“I remember that first race still. I flipped the car twice, rolled it over, landed on four wheels and kept on running and finished the race. That was some of the most fun I’ve ever had. It got in my blood, and I’ve been doing it for another 70 years.”

Farmer isn’t the only octogenarian still racing. “Big Daddy” Don Garlits and Chris Karamesines both still are drag racing part time at the ages of 85. Garlits is involved in electric-powered dragsters that approach 200 mph, while Karamesines still can hit 300 mph in his NHRA Top Fuel dragster.

“I’ve seen people that are young at 75 and old at 65. I still think that if you don’t have a goal to accomplish or something that you really look forward to, like I do every Saturday night to get out on that racetrack and run, if you’ve got no goals you get older a lot quicker.

SOME OF FARMER’S BEST CAREER STORIES

Farmer has an uncanny memory. Here are some of his favorite stories of his career:

— “I won my first NASCAR championship, the Modified Championship, in 1956. And you know who stood up at the banquet with me at Daytona and won the Sportsman Championship that same year was Ralph Earnhardt (father of Dale and grandfather of Dale Jr.). And then, back in 1990, I had a match race with Dale Earnhardt. That was the year he won the Winston 500, the IROC race and the sportsman race (all on the same weekend at Talladega Superspeedway). And the only race he lost was Friday night in a match race against me at the dirt track.”

— “I won the NASCAR Late Model Sportsman championship in 1969, 1970 and 1971. I said that was enough for me, four national championships was quite an accomplishment, which I never had an idea I’d ever do. I told Jack Ingram, ‘You take over from here,’ and he won the next three (championships in 1972-74).”

— “I was basically a short-track driver. I didn’t follow NASCAR’s Grand National much like Bobby and Donnie did. But I also won two ARCA 500s at Talladega in 1984 and 1988 and I won Daytona in 1971. So, I won on two of the biggest racetracks in the country, even though I was a short-track driver. I also ran fourth in the Talladega 500 (1972) in a (Grand National) car I built here in the backyard.”

— “One race I wanted to win bad was the Daytona (Late Model) race and I finally won the Permatex 300 in 1971. It was a very special race because my mother (Florence O’Neil) was there for the first race she’d ever been at Daytona. She didn’t travel that much or follow my racing, but she was there when I won and it was on her birthday, February 13, and she got to go to victory circle. I think that’s the biggest race I’ve ever won, to win it on my mother’s birthday.”

— “Everybody always asks me why I didn’t follow what Bobby and Donnie (Allison) did, but back in those days, if you didn’t have a factory sponsor or something like that, you were an also-ran. You’d be lucky to run in the top 15 if you were an independent. I didn’t have the big factory sponsorship, but I was not going to be a backburner, one of them start-and-park cars. I didn’t want to run 30th in a 35-car field and say I was a NASCAR Cup driver. I would rather go out on a short track and win a 30-lap feature and win the race rather than being a backburner. That’s why I didn’t do it. I went back to short track races and won all over the country. I’d rather go out and win at places like Huntsville, Montgomery, Birmingham and run on Friday and Saturday nights – and win races, too. That’s what I was there for, to win races. Second place was like kissing your sister, it don’t do nothing for you.”

— “I had a match race here a few years ago against Kasey Kahne. We were going to run three dashes, like five-lap races. Whoever won two of them was named the champion. I won the first one after I started on the pole, and he was on the outside pole. Then the next race, he won the pole, and I started on the outside pole, and I won that one, too. When I won the first two, we didn’t even run the third one.”