Red stripes return to the track’s walls for the first time since February 1988 — back when Richmond was the second race on the Cup schedule and the track was a half mile instead of the 3/4 D-shaped speedway it is today.

That February 1988 race was won by Neil B0nnett. Ricky Rudd placed second. After the race, 13-time track winner Richard Petty jumped on a bulldozer to begin the process of reshaping the track.

“I’ve always been fascinated by the historical racing images of the red and white on the wall at Richmond,’’ said Richmond President Dennis Bickmeier.

“Our long-time fans have often shared their fond memories of the red stripes, so it is a great day when we can reconnect with our history on the track. The red stripes unite our past with our future. We hope fans will have an awe-inspiring moment as they walk into the track for our Toyota race weekend.”

Here is mockup of what the walls will look like. 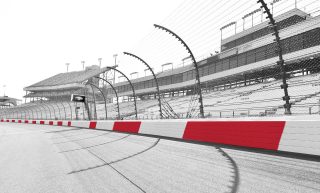