This year’s Monster Energy All-Star race format on May 20 will go back in time.

NASCAR and Charlotte Motor Speedway announced Tuesday that the 25th anniversary of the first All-Star Race held at night will be run with the same format as the first race that was held in 1992.

The “Silver Anniversary Gold Rush” of the iconic “One Hot Night” will once again have a $1 million prize to the winning team.

Here’s how this year’s format shapes up:

“This new 70-lap format pays tribute to the 25th anniversary of ‘One Hot Night’ while pushing the drivers to the brink of insanity with the chances they’ll take to win $1 million,” Charlotte Motor Speedway president and general manager Marcus Smith said in a media release. “I’m as ready as our fans for a May 20 Saturday night shootout where only a daredevil behind the wheel truly has a shot at Victory Lane.”

There’s also one added bonus of sorts: each team will receive one set of “softer tires,” to be used at their discretion. Softer tires provide cars more grip and speed, but there’s one caveat: if a team holds off using its set of softer tires until the final stage, then its car will start the 10-car/10-lap finale at the back of the field.

According to Goodyear, “the Option set-up is projected to be three- to five-tenths of a second faster per lap, out of the box.” Also, instead of Goodyear’s traditional yellow letters – which will remain on the Prime tires to be used in both the All-Star events and the Coca-Cola 600 on May 27 – the Option tires will feature bold, green lettering. 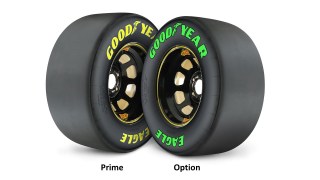 Several drivers have already clinched a starting spot in the All-Star Race based upon:

“The Monster Energy All-Star Race is designed to be fun for fans, showcasing the best drivers and race teams in NASCAR,” said Steve O’Donnell, NASCAR executive vice president and chief racing development officer. “With the effort that Goodyear has put into this race with multiple tire compounds, I am excited to see how the stages play out, especially the final 10-car, 10-lap sprint to the checkered flag.”

Qualifying takes place on Friday, May 19, including the “no speed limit” four-tire pit stop.

According to the media release, “Each team will have three timed laps, one of which will include a mandatory four-tire pit stop with no pit-road speed limits enforced. The five quickest teams will advance to the final round of qualifying to determine starting positions one through five. The team that completes the fastest stop will earn the Pit Crew Competition Award.”

There will be two other ways for drivers to advance to the All-Star Race:

2) By winning the popular Fan Vote.

Lastly, both the Monster Energy Open and Monster Energy All-Star Race will be televised on Fox Sports 1 starting at 6 p.m. ET on May 20. The Motor Racing Network and SiriusXM NASCAR Radio Channel 90 will carry the radio broadcasts of both events, as well.

Here’s a list of all winners of the All-Star Race, dating back to its inception in 1985: