Teams will resume the long haul of the season April 23 at Bristol Motor Speedway (with only one more weekend break in late August through the Nov. 19 finale at Miami).

With that in mind, here’s a look at the playoff standings following Sunday’s race at Texas Motor Speedway:

Only 16 drivers will qualify for the playoffs, which will begin Sept. 17 at Chicagoland Speedway.

Kyle Larson, who has one win and four runner-up finishes, leads the standings over Chase Elliott, who is the only driver ranked in the top four who hasn’t won this season.

Denny Hamlin is currently on the bubble, 164 points back from Larson.

Below is the top 20 in standings through seven races. Drivers in green would make the playoffs based on wins, drivers in yellow would based on points. 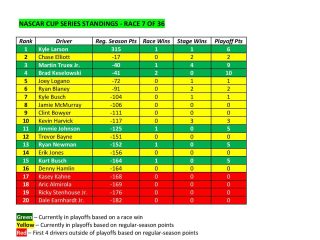