My NASCAR memories start to come into focus around 1996, a year before I attended my first race at Texas Motor Speedway as a 6-year-old. Even now, most of my NASCAR recollections prior to 2001 get fuzzier by the day.

The names, the races, the paint schemes. It’s embedded in my DNA as deep as the Top Gun soundtrack.

But was it really that great? That’s the question I hope to answer with this series, while learning more about the sport.

Why start with the 1995 Goody’s 500? With having covered the STP 500, I’ve had Martinsville on the brain for the last two weeks. The half-mile track is one of five Earnhardt claimed more than five wins at, and the 1995 race was the last one.

Also, the NASCAR of 1995 and 2017 have a couple things in common. Both seasons follow one where a driver won their seventh championship (Dale Earnhardt vs. Jimmie Johnson) and they’re the coming-out parties for the sport’s “youth” (Jeff Gordon vs. Kyle Larson, Chase Elliott, etc.).

Before we start, here’s a fun fact: There were two Goody’s 500s in 1995. The pain reliever also sponsored the Aug. 26 race at Bristol Motor Speedway (aka Dale Earnhardt vs. Terry Labonte, Part 1). Goody’s first sponsored the fall Martinsville race in 1983 and continues in 2017.

When the Winston Cup Series rolled into Martinsville on the weekend of Sept. 24, 1995, Bill Clinton was in his third year as president of the United States.

The air was filled with the sounds of Tim McGraw’s “I Like it, I Love It,” which was enjoying its third of five weeks as the No. 1 country song. Brad Pitt was asking Morgan Freeman “What’s in the box?” in David Fincher’s second film, Seven.

The Goody’s 500 was the 26th of 31 points races on the Cup schedule. Jeff Gordon, in his third full year on the circuit, had been in the points lead since the July 9 race at New Hampshire, 10 races prior.

Dale Earnhardt’s reign of terror was in its twilight. Despite three wins (North Wilkesboro, Sonoma and Indianapolis), he trailed Gordon by 309 points after the No. 24 won the previous week at Dover, his seventh win of the year.

On the afternoon of Sept. 24, the two defining names of NASCAR in the 1990s were on the front row after rain canceled qualifying. Gordon’s “pole” was his ninth of the year. At the time, Earnhardt had five career wins on the short track. Gordon had none.

With ESPN airing the race, Bob Jenkins had the call along with Benny Parsons and Ned Jarrett.

In 2017, there’s been a lot of hand-wringing over car counts. After the Daytona 500, only one race has reached the field maximum of 40 entries. Just a few years ago, the maximum amount was 43 cars.

But in the mid-’90s, short tracks had their own rules. A full field was 36 cars. For this race, six entries went home.

ESPN’s contributions to auto racing and how it’s presented on TV are immense. But in 1995, the practice of constant on-screen graphics depicting race position was still in its infancy. Here during the opening laps, Jenkins explained to viewers that new contraption up in the left-hand corner.

The race broadcast went to its first commercial on Lap 14 of 500. When it came back, Jenkins read ads for Ford, AC Delco and NASCAR’s 1994 season-in-review VHS tape. This tape can now be bought on eBay for $13, plus shipping and handling. As with any 22-year-old advertisement I see, I’m always tempted to call the toll-free number. 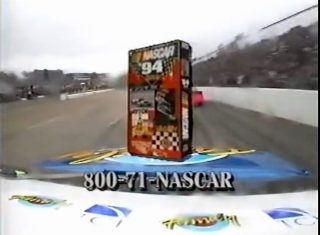 On Lap 32, the first caution came out due to rain. Earnhardt had a commanding lead over Rusty Wallace, who had won the last three Martinsville races.

I’m all for bringing out the tarps to stay dry when there’s a little moisture, but this is ridiculous. I’ve seen enough movies to know Richard Childress Racing is hiding an alien or an ancient artifact under there somewhere. My money is on an alien. 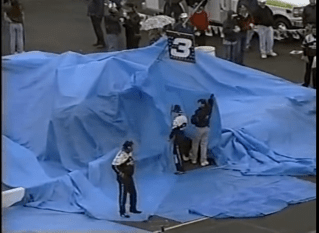 During the caution, everyone’s favorite pit road reporter, Dr. Jerry Punch, interviewed Childress. Andy Petree was Earnhardt’s crew chief at the time, but it already was known he wouldn’t be back the following year. Punch asked multiple questions about who would lead the No. 3 team (David Smith, Earnhardt’s longtime jack man, would get the job, and 1996 would be his only season as a Cup crew chief). An owner giving a midrace update on a crew chief search would be weird in 2017.

The race went back to green on Lap 51 with Earnhardt still in the lead. He lost it for the first time when Wallace passed him with 438 to go.

In the 22 years since this race, NASCAR has developed a quicker trigger finger when it comes to throwing cautions. The following accident, just shy of Lap 80, would undoubtedly cause a caution in 2017. In 1995? Move along, nothing to see here.

We’re just getting started. This is Martinsville by the way. While the broadcast showed a slow motion replay of Kyle Petty losing a large piece of metal debris that also would cause a caution today, race leader Wallace was taken out by Ward Burton, whom he just lapped.

As a result, everyone pitted. On top are 1995 pit stop times. Below, Martinsville pit times from 2016. 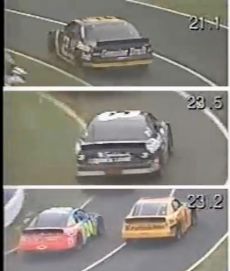 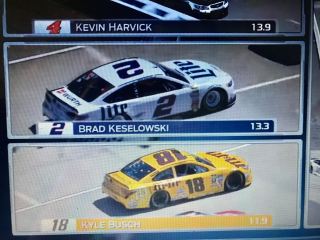 The next significant caution occurred on Lap 232. Every once in a while, Martinsville will catch you off guard. Such as this instance when Ted Musgrave went for a ride ON the backstretch wall courtesy of Robert Pressley. The broadcast showed a replay just as Musgrave went sprinting down pit road to confront Pressley at his car.

Remember what I said earlier about NASCAR throwing cautions? With 102 laps left in the race, Mike Wallace caused a fog drift to form when he spun exiting Turn 4. Jenkins, Parsons and Jarrett sounded just as baffled as I that it didn’t warrant a caution. Not that it mattered. Within three laps, there would be a caution involving Elton Sawyer’s No. 27 Hooters car and the No. 8 of Jeff Burton right in front of the leaders. Rusty Wallace lost a bunch of spots while avoiding a collision with Sawyer.

With 38 laps left, Earnhardt assumed the lead for the fifth time. Given the outcome, the following moment sent a jolt through me. Lake Speed, driving the No. 9 Spam car, spun in Turn 4. As Speed came down the track to get going, Earnhardt’s car flashed into view, seemingly avoiding hitting the No. 9 just in time.

During the resulting caution, the battered No. 2 of Rusty Wallace stayed out while the rest of the leaders pitted. In 1995, double file restarts among lead lap cars still were 14 years away. Earnhardt restarted behind Wallace, while the lapped car of John Andretti was the first car on the inside.

There would be one more restart with 20 to go after an accident with Dale Jarrett and Derrike Cope (the latter is the only driver in this race still competing in the Cup series in 2017).

Eleven laps later, “The Intimidator” made his presence known. The No. 3 forced Wallace to make a mistake entering Turn 3.

Nine laps later, Earnhardt took the checkered flag with ease. It was his sixth and final win at Martinsville.

Though Earnhardt significantly narrowed the points margin over the next five weeks and won the season finale at Atlanta Motor Speedway, the championship belonged to Gordon. Earnhardt missed out on an eighth title by 34 points.

There were 16 lead changes, with the last coming with nine laps to go. That’s compared with the 18 lead changes last Sunday in Brad Keselowski’s Martinsville win. Keselowski took the lead for the final time with 43 laps left

Whatever Happened to that Sponsor?

Heilig-Meyers – Sponsor of Mike Wallace’s No. 90 Ford: Heilig-Meyers was a furniture company founded in 1913 in Goldsboro, North Carolina, by Lithuanian immigrants, W. A. Heilig and J. M. Meyers.

The company was the primary sponsor of Cup series entries driven by Bobby Hillin, Jr., Wallace and Dick Trickle from 1993 – 1998.

In August 2000, after becoming one the largest furniture retailers in the United States, the company filed for Chapter 11 bankruptcy. All of its stores were closed by the end of the year, except for its RoomStore branches, which would be liquidated in 2012.