After late-race passes for the win in each of the first four races this year, and six if you go back to last season, can it get any better for the NASCAR Cup Series?

Yes. Auto Club Speedway is next.

This is home to NASCAR’s buzzer-beaters in this time of March Madness.

While the last six Cup races have seen the final pass for the lead take place in the last eight laps — Kurt Busch won the Daytona 500 with a last-lap pass — Auto Club Speedway has been the home of even more thrilling finishes.

The last four races at the 2-mile track in Southern California have seen the winning pass made in the final two laps. Go back a little further, and it is five of the last six races. Restarts, pit strategy, multiple lanes and good old-fashioned horsepower have combined to give fans some of the most exciting finishes in recent years.

Consider all the late-race excitement:

In 2016, Kyle Busch caused a caution with a blown tire that sent him into the wall and the race into overtime. Kevin Harvick led. Jimmie Johnson, his car adorned in the Superman paint scheme, passed Harvick in Turn 3 on the way to the white flag and pulled away for the win.

In 2015, a debris caution sent the race to its second overtime attempt with Kurt Busch leading. Brad Keselowski restarted sixth with four fresh tires and was second to begin the final lap. Keselowski charged by Busch to win.

In 2014, Kurt Busch led on the overtime restart and was challenged by teammate Tony Stewart. As Busch and Stewart raced side-by-side for the lead to begin the final lap, Kyle Busch closed. Stewart took the lead off Turn 2, and Kyle Busch soon motored past him and held off Kyle Larson to win.

In 2013, Kyle Busch emerged the winner after Joey Logano and Denny Hamlin dueled for the win on the last lap and made contact, sending Hamlin’s car into an inside concrete wall. Hamlin would miss four races after suffering an L1 compression fracture.

The string of late-race passes for the win at Auto Club Speedway was broken in 2012 when Tony Stewart led the final 22 laps. 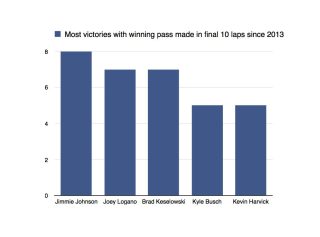 Auto Club Speedway doesn’t have a monopoly on such finishes. In the last 148 Cup races (dating back to the start of the 2013 season), 37.1 percent saw the final lead change take place within the final 10 laps. Yet, of the 12 races since 2013 that were determined on the final lap, three of those (25 percent) were at Auto Club Speedway, most of any track.

Logano and Keselowski are next.

While all of this is no guarantee of what Sunday will be like, if this weekend’s finish can match what has taken place there in recent years, it should be quite an ending.