Daytona Speedweeks proved to be one of the costliest ever for NASCAR team owners in the Cup, Xfinity and Truck Series.

More than 100 vehicles were damaged in wrecks during races at Daytona International Speedway, including 35 each in the Daytona 500 and the Xfinity race, based on NASCAR reports and information from Racing Insights.

Reasons vary on the cause of the pileups — from aggressive driving to inexperienced drivers to rule changes and the introduction of stages — but Speedweeks 2017 will go down as one of the most wreck-filled weeks in years. 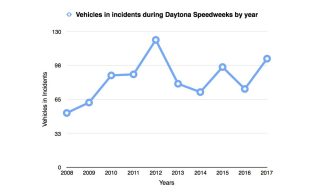 One of the reasons for the chaos in the Daytona 500 is where the accidents started. Drivers say they want to be at the front to avoid crashes, but that wasn’t helpful this time.

Dale Earnhardt Jr. was leading when Kyle Busch, trying to stay on the lead lap after a green-flag pit stop, had a tire issue and spun in front of Earnhardt. Six cars were collected.

Later, a 17-car crash started after Jimmie Johnson, running third, was hit from behind. Many had nowhere to go.

“That could have been avoided and it wasn’t called for,” Johnson said. “From the minute, I got off of Turn 2 on the entire back straightaway, I kept getting hit, and the rear tires are off the ground. I know there is a lot of energy behind me in the pack, but I didn’t have a chance.”

An 11-car crash started when Jamie McMurray hit the rear of Chase Elliott‘s car shortly after a restart as Elliott was running fourth.

But it wasn’t just the Cup drivers who had such issues.

Saturday’s Xfinity race featured a 20-car wreck that started when Tyler Reddick got hit from behind while running seventh.

A 12-car crash started when Brandon Jones was hit while running fifth after contact among two cars behind him.

“I thought everybody would still be somewhat smart and mindful of not tearing up your equipment early and let’s go after it with three to go,” Darrell Wallace Jr. said after he was eliminated by that accident. “But there are different mentalities out there and that’s what causes chaos.”

There was still more to go. A 16-car crash began when Elliott Sadler, running second, was hit from behind. In the Camping World Truck Series race, Matt Crafton was leading when he was hit in the right side by Ben Rhodes, who had been hit from behind. Crafton went airborne. Twelve trucks were in the accident.

So what caused all the crashes?

Many will blame the introduction of stages and the points that are awarded as a cause, but the only multi-car crash in the Daytona 500 that happened during the first two stages was when Busch’s tire let go.

The 17-car crash and 11-car crash happened after the completion of the second stage.

Daytona 500 winner Kurt Busch told NBC Sports that he thought the field would calm down after the completion of the second stage on Lap 120 since 80 laps remained.

“Excuse my language but there was shit going everywhere,’’ Busch said. “Everyone was going every which way. I couldn’t figure out what was going on.’’

He wasn’t the only to notice the aggressive driving that took place in the 500.

Kevin Harvick, who was involved in the 17-car crash, wasn’t pleased with how some raced.

“We just got some cars up there that didn’t need to be up there and wound up doing more than their car could do,’’ he said.

The result was a Daytona 500 that matched the tenor of Speedweeks and left crews with mangled machines to take back to the race shop.