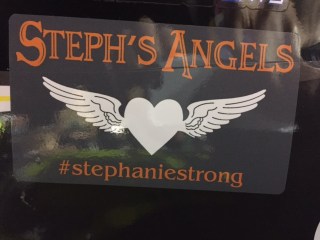 Noah Gragson, a rookie driver for Kyle Busch Motorsports in the Camping World Truck Series, is competing with a heavy heart tonight after the death of a crew member’s wife just before Friday’s race.

Stephanie Merritt, the wife of team mechanic Jeff Merritt, died from injuries sustained in an auto accident two weeks ago.

Gragson, 18, gave an emotional interview with Fox Sports 1 prior to the NextEra Energy Resources 250.

“One of my guys back home, Jeff, we had a hard loss a couple of minutes ago,” Gragson said. “His wife passed away. They got in a car wreck over the offseason. He worked really, really hard on this truck. We’re going to go out there and drive as hard as we can today for him, for Stephanie.”

The stickers shown above is on Gragson’s truck.

Gragson, driving the No. 18, will start 12th is his third race in the Truck Series.

He was eliminated in a 17-truck crash on the second lap. He was hit from behind and sent into the wall, triggering the incident.

Racing with a heavy heart for Jeff and Stephanie tonight. You will be missed❤ #RIPStephie