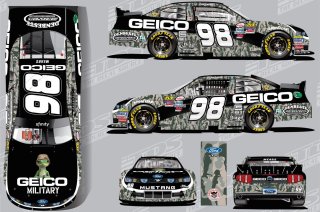 Casey Mears is sitting on the sideline during Speedweeks in Daytona Beach, but he’ll soon be racing himself in the Xfinity Series.

Mears, a veteran of 14 NASCAR Cup Series seasons, will compete in an initial 12 Xfinity races for Biagi DenBeste Racing beginning with the March 25 race at Auto Club Speedway. Mears will pilot the No. 98 Geico Military Ford.

Mears is recently departed from Germain Racing, where he drove its No. 13 Chevrolet beginning in the night race at Bristol Motor Speedway in 2010.  Mears has 488 Cup Series starts since 2003 and one win, the 2007 Coca-Cola 600.

Mears will share the ride with Aric Almirola, who will drive the No. 98 for the superspeedway races.

“I’m thankful for Geico’s continued support and I’m happy we were able to get this deal put together with Biagi-DenBeste Racing,” Mears said in a press release. “Fred Biagi and Bill and Lori DenBeste are great people and I’ve always respected them and how committed they’ve been to NASCAR and building their team over the years.”

Mears last competed in the Xfinity Series in 2010. He has 93 starts in the series, but only one full-time season in 2002. he earned one win in 2006 at Chicagoland Speedway.

“It’s great to have Geico back on-board after experiencing success together early on,” team owner Fred Biagi said in a press release. “Geico is a first class company that has high standards and cares about its customers. Our philosophies line up well and we look forward to working together to have a successful year with Casey and the Geico Military Ford.”