The lengthy delays to dry Texas Motor Speedway should end with Friday’s announcement that the 1.5-mile track will be repaved beginning Monday.

Officials also announced that the banking in Turns 1 and 2 will be reduced from 24 degrees to 20 degrees. The racing surface width will expand from 60 to 80 feet in those turns. The banking and racing surface in Turns 3 and 4 will remain the same.

The project is expected to be completed by mid March. NASCAR returns there April 7-9 with the Monster Energy NASCAR Cup Series and Xfinity Series. Gossage declined to reveal the cost of the project.

The move comes after issues last year with drying the track at both NASCAR race weekends and the IndyCar race. Last fall’s Chase race for the Cup series was delayed nearly six hours by rain and a slow-drying track. The race also was shortened by rain. That came a few days after a passing shower forced a Camping World Truck Series practice to be rescheduled a day. Last summer, an IndyCar race there had to be postponed because five hours of drying wasn’t enough.

“Given our recent issues with having difficulty in getting the track to dry, we felt it was something we had to do that the fans that come to the racetrack know that the track is going to dry quickly .. and they get what they came for,’’ Eddie Gossage, president of Texas Motor Speedway, said on a conference call with reporters.

Gossage said that he “it would probably be wise” for NASCAR to expand the weekend schedule in April to give teams additional time on the track. A NASCAR spokesperson told NBC Sports that weekend schedules are still being developed but officials expect to work with Goodyear and teams to create an ideal schedule for all.

Gossage also had a message for Goodyear.

Gossage has said that the 2-inch top layer had become porous after years of being hammered by ground effects of Indy cars, stock cars and Air Titans.

The announcements come as Speedway Motorsports Inc. has seen an uptick in its stock price, hitting a 52-week high on Wednesday at $21.97 per share.

The repave will feature an asphalt mix similar to the track surfaces at Kentucky Speedway and Las Vegas Motor Speedway.

The track also is enhancing its drainage system, creating multiple points for water to drain away from the facility more efficiently.

The project will be done in four stages, beginning with the installation of the drainage system on the backstretch. The same construction then will take place on the frontstretch. The banking then will be changes in Turns 1 and 2 with the repaving the final stage.

Gossage also explained that changing the banking was done to enhance the racing. 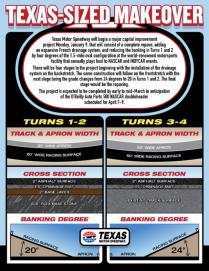