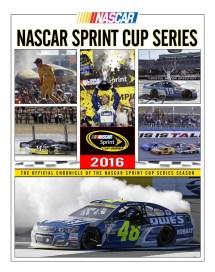 It seems as if it was just last year that Jimmie Johnson was winning his seventh NASCAR title, Tony Stewart was saying goodbye to Cup racing and Jeff Gordon was substituting for an injured Dale Earnhardt Jr.

Wait, it was last year.

A lot happened in 2016, which is receding in our rearview mirrors like a car that spun the tires on a late restart.

Less than two months after the season’s conclusion, you can order the official NASCAR yearbook that documents the 2016 NASCAR Sprint Cup Series. It is the latest in a series that has been published since the mid-80s.

The “official chronicle” of the 2016 campaign is sold by Round 5 Books. In a press release, the publisher says there are a “very limited number” of copies of the yearbook left.

You can buy yours for $40 plus shipping and handling at the publisher’s website.