Court documents show that Tony Stewart has withdrawn his appeal of a district court’s ruling that Axis Insurance Company is not responsible for any claims against Stewart in the death of Kevin Ward Jr.

No reason was given for the action. Stewart may reinstate his appeal by Jan. 30, according to court documents.

By withdrawing the appeal, Stewart could be responsible for all costs defending himself and any damages awarded to Ward’s family in its lawsuit or if there was a settlement.

NBC sent requests for comment to Stewart’s attorneys. They had yet to respond.

Judge David N. Hurd ruled July 29, 2016, in U.S. District Court for the Northern District of New York that Axis was “not obligated to defend” Stewart in the Ward lawsuit and granted Axis’ motion for summary judgment.

The Ward family’s lawsuit against Stewart remains. The case has been sent to mandatory mediation. That is to be completed by March 31, 2017.

Ward died Aug. 9, 2014, after he was struck by Stewart’s sprint car during a race at Canandaigua (N.Y.) Motorsports Park. Ward, 20, exited his car after hitting the wall and walked down the track toward Stewart’s car during the caution when he was hit and killed. An Ontario County (N.Y.) grand jury ruled Sept. 24, 2014, that Stewart would not face criminal charges.

The Ward family filed a wrongful death lawsuit against Stewart on Aug. 7, 2015, claiming that Stewart “wrongfully caused Mr. Ward’s death by acting with wanton, reckless and malicious intent and negligence.’’

Stewart claimed the incident was unintentional. 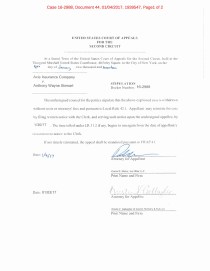 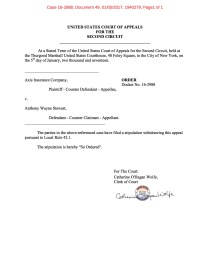