In his job as a NASCAR satellite radio personality, Mojo Nixon annually attends a few races to bring elements of his memorable Manifold Destiny show to the track.

While there, he leaves the same distinct impressions on people that he has for decades as a radio host, rock musician and generally fun-loving rabble-rouser. 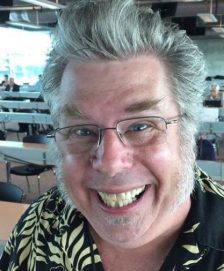 “As he walked away, (Harvick) said, ‘Who the hell is that hillbilly and what is he on?’” Nixon recalled during the most recent episode of the NASCAR on NBC podcast. “He was only half-joking.”

Nixon certainly has become an unlikely figure on the NASCAR landscape.

His original claim to fame was as a recording artist in the 1980s. He made offbeat music that became a fixture on college radio (Elvis is Everywhere and Debbie Gibson is Pregnant with my Two-Headed Love Child to name a few of his “hits”) while also being saluted by others (“Punk Rock Girl” by the Dead Milkmen has a Mojo shoutout).

But Nixon also has a lifelong passion for NASCAR that was nurtured during an upbringing in Danville, Virginia. His The Ballad of Wendell Scott song pays homage to the most famous driver from his hometown, where he learned to idolize Richard Petty and other stock-car heroes.

Nixon is the host of two other SiriusXM programs – a recently retired political talk show whose name can’t be disclosed here and a popular offering on SiriusXM’s Outlaw Country channel. 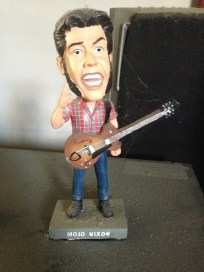 But his weekly Manifold Destiny has been a fixture virtually since the 2007 inception of SiriusXM’s NASCAR channel, and David Ragan (whose mild-mannered persona is the antithesis of Nixon’s counterculture approach) has been a regular guest for years.

“The fact that I have a full-time Cup driver on my show is shocking,” Nixon said. “Shocking!”

Among the other topics discussed by Nixon on the podcast:

Here are time codes for easy referencing while listening: 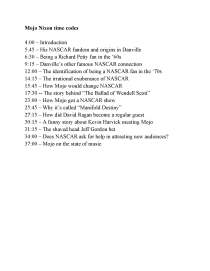