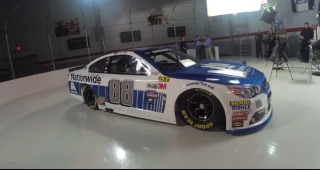 Gone is the silver that complemented Nationwide’s trademark blue last season. In its place is a  plain white look on the sides with a blue “RPM bar” streaking down it.

“I like to keep the car understandable,” Earnhardt said. “When you decal a race car you got a lot of contingency decals, the number, co-sponsors, the primary sponsor. The paint scheme itself, I like to have the car understandable once you have the car completely decalled. Some of our ideas trend to the conservative side. But I like the RPM bar, that’s something (crew chief) Greg Ives came up with and he’s really about.”

Earnhardt said he “loved” the old silver and blue paint scheme but that it sometimes caused problems for spotter TJ Majors.

“A lot of times at the racetrack, that silver would sort of blend into the asphalt,” Earnhardt said. “It’s difficult for the spotter as well when he’s trying to spot a car at a 2-mile race track or a mile-and-a-half race track.”

After missing the second half of the 2016 season due to recovery from a concussion, Earnhardt is expected to be back full-time in 2017.