When Danica Patrick made the transition from IndyCar to NASCAR, it necessitated learning entirely new ways to communicate about the handling characteristics of a race car.

As she prepares for a future beyond racing, she is embracing another new vernacular: Fashion design.

“While I love clothes, I’m also learning what things are called,” Patrick said during the latest NASCAR on NBC podcast. “I learned that I really love a raglan sleeve.

“I’m learning a lot as I go because it’s important to know so I can communicate with the designers.”

Patrick is launching her first clothing line. “Warrior,” which will be available Jan. 2 on HSN, will focus on the “athleisure” trend.

“I think we all have a lot of hope, excitement that it could be big,” she said.

The clothing line and a book (“Pretty Intense”) planned for a 2018 release are among several off-track projects that comprise a long-term strategy to sustain Patrick, who will turn 35 in March, as a marketable personality after her NASCAR career has ended.

“I’m definitely not on the front side of my career,” said Patrick, who is more than 11 years removed from becoming the first woman to lead the Indianapolis 500. “It’s important to use the platform I have as a transition and a launching pad, really. I don’t know when that transition is going to happen.

“The projects are about building something. … There is potential upside that is way, way more than an endorsement because there’s no end in sight, and if it’s successful, it won’t end anytime soon.”

Other topics discussed by Patrick on the podcast:

–How new sponsor Nature’s Bakery has made it easier to align her personal and professional branding (and her hopes of one day creating her own fig bar for the sponsor);

–Her disappointing 2016 Sprint Cup season and her expectations for 2017;

–Why she decided to tweet recently about the president-elect;

–What it’s like hanging out around friends with kids;

–How Tony Stewart’s transition from driver to owner might return him to being a mentor.

Here are time codes to provide easy referencing while listening to the episode. 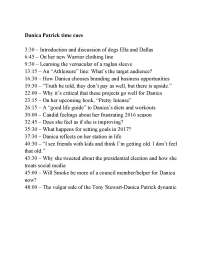