The model turned out to just scrape by with accurate guesses at Phoenix. We had predicted Kyle Busch and Joey Logano as our two best bets to fill the last two spots, but we said it was a really close call.

And that’s exactly what happened. They made it, but man it was really a close call.

So here we are: four drivers for the title. The last two drivers who made it are actually the heavier favorites than Jimmie Johnson and Carl Edwards, who were locked in before Phoenix.

Kyle Busch won this race last year to win the title. Our forecast likes him a little bit more than everybody else, but it’s very tough to declare a clear favorite. Johnson has recent momentum, but Busch has been strong all year. Logano has also been consistent all season, but just not as good as Busch. And Carl Edwards, probably the least likely winner, still has a decent shot of taking this in the unique one-race format.

This is the problem with calling a winner. It’s just one race, not an entire season. There’s no chance to “average things out” or “balance the ups and downs” – one mistake and that’s it.

Something else to watch out for, Busch’s ability late in the race to catch up. “Of these four, he’s the best driver at squeezing a good finish from a less-than-perfect car,” Browne said. “When it comes time to perform, there is no better driver at finishing strong.” 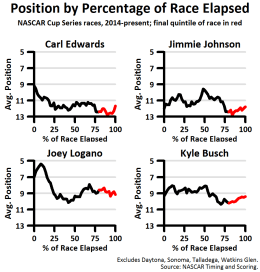