While struggling this past summer, Kasey Kahne wasn’t alone at Hendrick Motorsports, but it was a small consolation.

“I was still the fourth out of the four,” Kahne said on this week’s episode of the NASCAR on NBC podcast. “Fourth out of four once in a while isn’t a bad thing. To do it every week, be the worst at HMS, obviously there’s an issue and we’ve got to figure it out. Since then, we’ve started figuring it out.”

Kahne will enter Sunday’s race at Phoenix International Raceway with top 10s in seven of the past 10 races. The 2011 winner at Phoenix believes he can triumph on the 1-mile oval or next week at Homestead-Miami Speedway, avoiding consecutive winless seasons for the first time in his Sprint Cup career.

Kahne addressed several other topics, including:

–What it’s been like being a latecomer to the baby boom among NASCAR drivers (Kahne’s son, Tanner, just turned 1);

–His commitment to running and his 5K charity event;

–His passion for sandwich-making;

–Why he owns a sprint car team and continues to race on dirt. 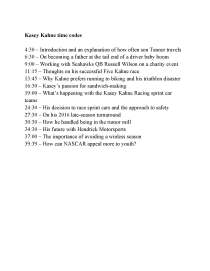