After a gutsy win by Jimmie Johnson at Martinsville Speedway, he’s locked into the championship round in Miami and shot up to the top of our title favorites.

The model didn’t fully believe in Johnson earlier this Chase, but his recent performance changed the computer’s mind. Johnson’s title chances have jumped from 9 to 10 to 23 percent in the last three weeks. 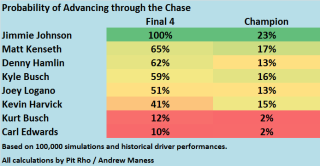 Martinsville’s biggest loser was Kevin Harvick. Finishing 20th, Harvick’s title chances fell to 15 percent compared to 31 percent last week. He’s had four finishes of 20th or worse in the past 10 races. His 41 percent chance of advancing to the final four is mostly due to his ability to win in this round. Because of his recent inconsistency, he only has a 19 percent chance to get in on points.

You can think of the eight drivers in three groups: There’s Johnson by himself in the first group. Then you have five drivers, all with similar title odds between 13 and 17 percent.

Behind Johnson, we still see the strength of Joe Gibbs Racing: Matt Kenseth, Denny Hamlin, and Kyle Busch are the three favorites to join Johnson at Homestead. In fact, all the Toyotas combined have a 47 percent chance of winning the title.

“The Hendrick stable seems to have found some recent speed at the 1.5-mile tracks,” said Josh Browne, former Sprint Cup crew chief and co-founder at Pit Rho. “With the 48’s recent finishes at Kansas and Charlotte in mind, I wouldn’t be surprised to see him go back-to-back this weekend. It’s tough to count out Harvick and his team – however, the mathematical model is not necessarily bullish on him.”

Entering Martinsville, we discussed how Johnson and Hamlin needed this race as their best way to qualify for the final round. They combined to lead 140 laps. Unfortunately for Hamlin though, he didn’t win. He still has a good 62 percent chance of advancing, but that means there’s a 38 percent chance he won’t make it. A lot of risk for him.

At the bottom, there’s our final group: Kurt Busch and Carl Edwards. Each has about a 10 percent chance of advancing and a measly two percent title odds. The two are trailing in points. It’s going to be hard for them to come back.

Surprisingly, Harvick is only two points ahead of Kurt Busch in the actual standings. But their odds of advancing are very different from each other – a bigger gap than we’d typically see from just two points. That’s because of what we talked about earlier: Harvick has a good shot of winning an upcoming race; Busch does not.

Eric Chemi runs data journalism for CNBC, including a heavy dose of sports analytics. Prior to that, his NASCAR forecasts have been on Sprint Cup television broadcasts, and he has consulted for Sprint Cup teams on strategy, statistics, data, and analytics. He graduated with an engineering degree from MIT.