On the latest episode released Wednesday, Gossage recalled a poignant moment in the track’s care center with Stewart after the three-time series champion had been burned by a flash fire from an engine failure.

“I walked in and here’s Tony sitting on a gurney, and nobody else was there,” Gossage said. “He looked up and said, ‘I came to check on you. How are you?’

“His eyes got a little watery. He kind of leaned up and gave me a hug and said, ‘No one ever checks on you,’ and that was it. Two of us for a moment in the infield care center.”

Gossage said Stewart embodies a working-class hero spirit that has been the key to his fan appeal.

“Tony can tell you stories about being a welder in the winter in an aluminum building with no heating and how hard that was and miserable it is,” Gossage said. “But that was the price he was willing to pay to climb the ladder. Some of these younger (drivers) don’t have these stories, and that’s kind of tough some times.”

Norris, the 1980s action hero movie icon, will be introducing the Chase for the Sprint Cup championship contenders before Sunday’s AAA 500. Gossage is a longtime friend.

“The baddest man on the planet according to all these memes is Chuck Norris,” Gossage said. “So I called Chuck and said what do you think. He said, ‘Fantastic, let’s do it.’ ” 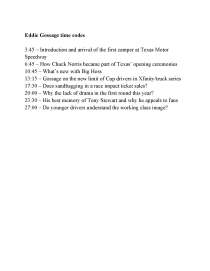