NASCAR statistical guru Mike Forde was the guest on the latest NASCAR on NBC podcast, analyzing the Round of 8 and discussing how teams delve into numerology for advantages.

While Loop Data mostly remains a niche interest, Forde said there has been increasing interest on social media (“fantasy players really devour that stuff”) and from NASCAR teams. Kyle Busch has been known to highlight his perfect driver ratings in postrace news conferences, and crew chiefs dispatch PR representatives to check with NASCAR’s Integrated Communications Department to check on discrepancies.

“NASCAR doesn’t’ get the credit for being as analytic as it is,” Forde said. “Teams have data analysts. We have data analysts. Something as simple as pit stall selection, the crew chiefs have the average finish of every single pit stall. … They’re begging NASCAR for (more stats).” 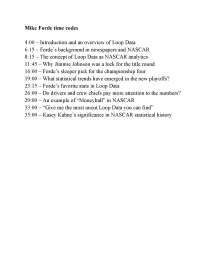