Romain Grosjean and Esteban Gutierrez will carry the home country’s flag for Haas F1 this weekend in the United States Grand Prix at the Circuit Of The Americas.

But the Formula One drivers also would like to race at other American tracks — namely those that play host to NASCAR races.

As guests on the latest NASCAR on NBC podcast, Grosjean and Gutierrez both said they have lobbied team owner Gene Haas about trying a stock car for Stewart-Haas Racing.

“I’d love to give it a go and try a day or two of testing and then see how we’re doing and from there have a go,” Grosjean said. “I do go-kart, I do ice racing, I do Formula One. I love driving, so NASCAR would be a really good thing to try.”

Said Gutierrez: “For me, it’s all about the curiosity to try something completely different. I’ve mentioned it once we should it as a team activity. It’s just (being) curious about a different concept.”

“Everything is different in the driving style,” the Frenchman said. “We brake very hard, very late, I’ve heard in NASCAR you don’t need to brake so hard.

“It would be different not being in the center of the car, with gear shift, but it would be a great experience. You’re fighting against the best drivers in NASCAR. They’ve been doing it for generations. It’d be a nice challenge, experience, and I’m sure I’d enjoy it.”

Gutierrez has more ambitious goals of driving a stock car on an oval, playfully suggesting a car swap with fellow countryman Daniel Suarez (a longtime friend whom he often raced while growing up in Mexico).

“It could be interesting just to go flat out and feel the limit of the car all the time,” Gutierrez said. “I’d go for a big one. Talladega. The craziest one.”

It won’t happen this weekend, of course. While NASCAR will be whittling its playoff field to eight drivers Sunday at Talladega Superspeedway, Grosjean and Gutierrez will be racing in Austin, Texas.

It’s been an impressive debut season for Haas F1, which has scored points with Grosjean and advanced both cars to the final round of qualifying for the first time two weeks ago at Japan.

“On social media, I can see that the United States grew massively in the percentage of my followers, which was great,” he said. “I wish we had more races in the U.S. It’s such a big country, we could have two to three grands prix. Definitely, things have changed, and people are really following us. It’ll be interesting to see how Austin goes.” 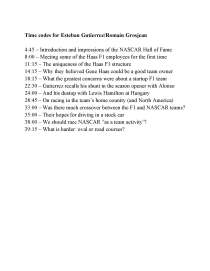