Two Sprint Cup drivers who are in the midst of their most disappointing seasons joined the NASCAR on NBC podcast to analyze adversity and what lies ahead.

Clint Bowyer, who is 26th in the points standings, and Greg Biffle, ranked 24th, were the guests in separate conversations at Kansas Speedway last week.

Biffle, who is four races away from his 500th consecutive start in the Sprint Cup Series, has taken a leadership role at Roush Fenway Racing, his home since 1998. But while he has been able to help with pit stops, Biffle said there are limits to how much he can help the team improve.

“There are a lot of things I want to change and do different, but it’s tough for the driver to go in and change a bunch of things inside a company and people and realign this and that,” he said. “I’ve been able to make some influences, but I haven’t been able to do all the things I wish I could. I’m not up there on the (management) list and not the competition director. I can only kick and scream so much and push and make an influence where I can.”

Biffle, who missed the Chase for the Sprint Cup for the second consecutive season, said it’s difficult to watch longtime teammates Carl Edwards and Matt Kenseth excel after joining Joe Gibbs Racing over the last three seasons but said, “I’m the type of person who wants to work hard and bring the whole organization with me to be able to compete at the level you need to (perform.)

“There’s nothing more frustrating than knowing you have the ability but don’t have the equipment,” Biffle said. “That’s been tough the last two to three years. You’ll see guys who moved on and won races and championships that I was doing better than when they were racing with me.”

Though Bowyer’s performance marginally has improved with new crew chief Jay Guy in his one-year stint at HScott Motorsports – his 26th at Kansas snapped a six-race streak of top-25 finishes – he is looking forward to taking over the No. 14 from Tony Stewart at Stewart-Haas Racing next season.

“There’s a lot of things, talk and excitement, for next year,” said Bowyer, who recently began receiving merchandise approvals for 2017. “You’re already starting to think about those things. You have to; everybody in the garage area is. Whether I was going somewhere else or staying where I’m at, you’re already working toward next year.

“That always gets your wheels cranked up again because you’re thinking, ‘All right, man, we did this wrong. We can do that better next year.’ There’s always those things in the back of your mind, so I can’t wait.” 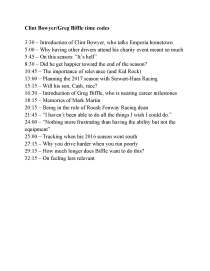