When he was exploring the possibility of entering NASCAR as a car owner, Fenway Sports Group co-founder John Henry attended a race weekend as a guest of Jack Roush.

“I think John said, ‘I don’t know why I want to start my own team. I just want part of your team,’” Roush Fenway Racing president Steve Newmark said on the latest episode of the NASCAR on NBC podcast.

Before joining the team as an executive six years ago, Newmark, who worked as a lawyer on business in auto racing and sports, helped broker the deal that led to the formation of Roush Fenway Racing in 2007. Roush sold a stake of his championship team to Henry’s FSG, which has owned the Red Sox since 2002 and now has worldwide sports interests ranging from the Liverpool football club of English Premier League to LeBron James’ marketing firm.

Unprecedented in its complexity and scope, the merger with Roush required a major learning curve for FSG.

“I think the biggest impediment was NASCAR was so foreign to all the business folks on the Red Sox side,” Newmark said. “Most of them had exposure to the NFL and the NBA. They all have their nuances, but the models are somewhat similar. It was very difficult to educate them because they had very entrenched views about how leagues are run. We were so fundamentally different from that.”

In its 10th season of working together, Newmark said the race team works weekly with the FSG sales team in building business and sponsorships.

“They have a much greater understanding of how to sell NASCAR,” said Newmark, who recently provided a business update to Henry in a suite at Fenway Park during a Red Sox-Yankees game. “We do interface with the Red Sox quite a bit.

“Overall, the relationship continues to be probably a model partnership.”

Other topics discussed by Newmark on the podcast:

–The origins of the Race Team Alliance, from the early meetings among NASCAR power brokers to the list of names considered for the group;

–Behind the scenes of the negotiations that led to landmark charter deal for teams this season;

–The evolving role of Jack Roush from iron-fisted manager to a more genteel mentor.

Here are time codes for easy referencing while listening to the podcast: 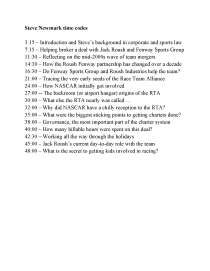