Alex Bowman‘s paint scheme for the Alabama 500 at Talladega Superspeedway may blend into its surroundings. 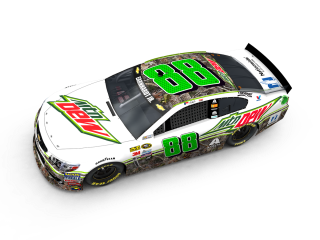 Bowman, who will drive the No. 88 of Dale Earnhardt Jr. for the seventh time in 2016, will have a camouflage Mountain Dew paint scheme for the Oct. 23 race.

The scheme is called “Take it Outside.”

Bowman will be making his fifth Sprint Cup start at the 2.66-mile track. In his four starts, Bowman only finished once (16th) while crashing out of the other three.

In his five starts in the No. 88 this season, Bowman has an average finish of 23.8 after recording his first DNF at Charlotte last weekend.