The race is the second in the inaugural playoff for the circuit.

Speeds from the first of two sessions: 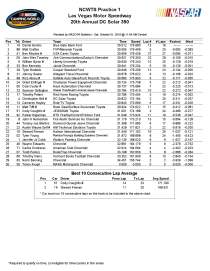