NASCAR issued a bulletin to teams this week that expands what could trigger an encumbered finish for the Sprint Cup, Xfinity and Camping World Truck Series.

Previously, NASCAR stated that a P4 infraction for missing lug nuts or failing the postrace Laser Inspection Station would trigger an encumbered finish. That would mean if a team won and had such an infraction, its victory would not count toward advancing in the Chase, along with other penalties. When NASCAR announced what could lead to an encumbered penalty for those infractions, it noted that no one had reached those levels this season.

The bulletin adds that “Infractions that may give rise to an encumbered Race finish, but are not limited to:”

Here is the updated section in the Sprint Cup Rule Book 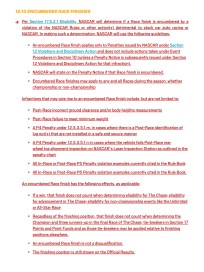