Kevin Harvick’s win at New Hampshire Motor Speedway didn’t do much to change his Chase for the Sprint Cup title hopes. Even before that win, he already had the highest chance of winning the title. Now he’s up to a 31 percent likelihood of being the champion. Second place is still Brad Keselowski, at 15 percent.

They remain the only two drivers with at least a 10 percent title chance. 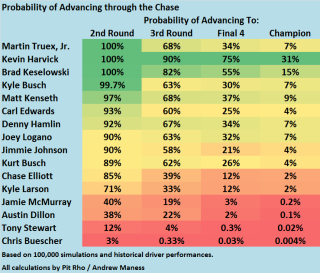 Notice only three drivers are locked in to the next round: Harvick, Keselowski, and Martin Truex, Jr. Remember last year we said Jimmie Johnson had a 97 percent chance of advancing – but 97 is not 100! Johnson suffered a part failure at Dover International Speedway and did not advance. Unless you see 100 there, it’s not a sure thing.

Similarly, unless you see 0.00 percent, every driver still has a chance. Indeed, Chris Buescher still has the faintest chance of winning the title.

The bottom three drivers in our model – Austin Dillon, Tony Stewart, and Buescher – were the bottom three we had forecast before the Chase even started. Their performance is indicative of what we thought would happen. Harvick and Keselowski’s early success is also what we expected, as our two title favorites.

“Last weekend’s race at Loudon was mostly caution-free until the end,” said Josh Browne, former Sprint Cup crew chief and now co-founder of Pit Rho. “For most of the race, we saw Harvick, Truex and the Gibbs cars dominate the front of the field. Sprinkle in a Penske car and you’ve pretty much summed up the season to this point. It’ll likely take mental or mechanical errors to break the dominance of these cars in the remaining seven races. And Talladega.”

Despite most things going as we would expect, there’s still a 64 percent chance that somebody currently in the top 12 will drop out at Dover. We’re not sure who will fall out and who will climb in, but the chances are good that some kind of shift will happen. The most likely targets are Chase Elliott and Chip Ganassi Racing teammates Kyle Larson and Jamie McMurray. They’ll be fighting for the bubble.

With the help of Andrew Maness from the racing analytics firm Pit Rho, we ran the numbers to show every driver’s shot of moving through each round of the Chase. The mathematical model was designed by both Maness and I, using past driver performance to predict future results. By running 100,000 simulations of how the rest of the season might play out, we see the most likely outcomes.