It started when a guy in Indiana sent a snarky tweet about NASCAR.

More than six years and 157,000 postings on Twitter later, the @nascarcasm account has become a satiric phenomenon. With a large following that includes NASCAR fans and famous drivers, @nascarcasm turned into the unlikeliest of full-time jobs for its creator.

“There’s not much preplanning and thought that goes into starting a Twitter account,” Dave Vrabel, an Indianapolis resident who goes by the byline @nascarcasm, said during the latest episode of the NASCAR on NBC podcast. “It’s just a dumb, little thing you do on some random day in June.

“It’s really hard to describe something that started on a lark. It’s a little surreal.”

Other topics discussed by @nascarcasm on the podcast:

–The story behind his relatively recent NASCAR fandom;

–On being employed by NASCAR Digital Media and having to walk a fine line editorially;

–His best and worst jokes;

–His interactions with drivers and how well he has gotten to know some of them.

–How he used his platform in a poignant way after the death of his mother.

Here are time cues for easy references while listening: 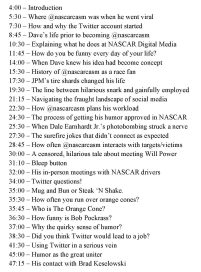