Matt Kenseth goes for his third consecutive win at New Hampshire Motor Speedway while also trying to secure his spot in the next round of the Chase.

Today’s race is the middle event in the opening round of the playoffs and will set up what drivers will need to do next week at Dover to advance to the Round of 12.

Here is all the info for today’s race:

START: Kevin Holleran, president of Textron Specialized Vehicles, will give the command start engines at 2:07 p.m. The green flag is set for 2:15 p.m.

PRERACE SCHEDULE: The Cup garage opens at 8 a.m. The driver/crew chief meeting is at noon. Driver introductions are at 1:25 p.m.

TV/RADIO: NBCSN will broadcast the race with its coverage beginning at 1 p.m. with NASCAR America, followed by Countdown to Green at 1:30 p.m. and race coverage at 2 p.m. Performance Racing Network’s radio broadcast begins at 1 p.m. and also can be heard at goprn.com. SiriusXM NASCAR Radio will have PRN’s broadcast.

FORECAST: The wunderground.com site predicts a temperature of 61 degrees at race time with a 0 percent chance of rain at the start of the race. 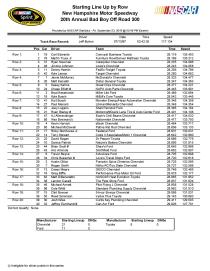