It is the first pole Byron has won. His previous times starting on the top spot came after qualifying was canceled. Byron won the pole Saturday with a lap of 132.864 mph.

The last four pole winners went on to win at New Hampshire in this series.

Daniel Hemric and John Hunter Nemechek were the only Chase drivers who failed to advance to the final round. Hemric will start 13th and Nemechek 15th. 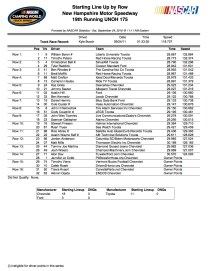