The inaugural Xfinity Series Chase begins tonight at Kentucky Speedway with the VisitMyrtleBeach.com 300. It’s the second visit to the track in Sparta, Kentucky, this year.

Ryan Blaney is the defending winner.

Here’s all the important info for tonight’s race.

START: Diana Green, executive vice president of membership programs & services for the Myrtle Beach Area Chamber of Commerce will give the command to start engines at 8:07 p.m. The green flag is scheduled for 8:15 p.m.

PRERACE SCHEDULE: The Xfinity garage opens at 11 a.m. The driver/crew chief meeting is at 6:15 p.m. Driver introductions are at 7:30 p.m.

NATIONAL ANTHEM: The Airlifter Brass of the USAF Band of Mid-America will perform the National Anthem at 8:01 p.m.

TV/RADIO: NBCSN will broadcast the race with its coverage beginning at 7:30 p.m. with Countdown to Green, followed by the green flag at 8:15 p.m. Performance Racing Network’s radio broadcast begins at 7:30 p.m. and also can be heard at goprn.com. SiriusXM NASCAR Radio will have PRN’s broadcast.

FORECAST: The wunderground.com site predicts a temperature of 77 degrees at race time with a three percent chance of rain at the start of the race. 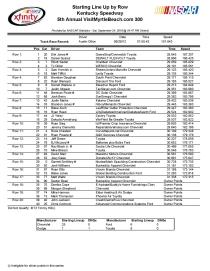