William Byron‘s win Saturday moves him to the second round of the inaugural NASCAR Camping World Truck Series Chase.

Johnny Sauter is sixth in the points after the first race in this three-race round. The top six drivers advance to the second round. Sauter has a one-point lead on Ben Kennedy for the final transfer spot. Daniel Hemric is 21 points behind Sauter. 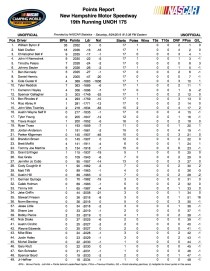