As the recently named chief marketing officer of NASCAR, Jill Gregory’s job is to help tell the storylines of the sport’s stars both present and future.

While fans are familiar with champions such as Brad Keselowski, Jimmie Johnson and Tony Stewart, they might know less about up-and-coming drivers because their results naturally are lacking until they emerge.

Thus, the trick becomes how to promote the next-generation stars before they’ve enjoyed the success of the current establishment, which prompted an amusing discussion recently for Gregory.

“It’s hard because I was actually having a conversation with a very successful Sprint Cup driver a week or two ago, and he’s like, ‘You need these guys to win,’ ” Gregory said on the latest episode of the NASCAR on NBC podcast. “I said, ‘I know. Can you pull over and let them win and help somebody out?’

“It’s a balance, because every measure we look at, every fan data, winning on the track is crucial. Whether it’s young fans, old fans or across the demos, everyone wants to see a winner. And you can build on that. But you also have to do that prework.”

“That interest in the drivers and whatever their stories are is top of mind,” she said. “We’ve had to instill that in NASCAR. For many years we let on-track storylines play out, and we’d highlight them when it made sense and obviously got very lucky with Jeff Gordon and Dale Earnhardt Sr., and those were very compelling.

“We realized several years ago that NASCAR had to take a more active role in really pushing these storylines up and showing fans who these young drivers are so when they do have that breakout moment, fans are like, ‘Oh that’s really cool. Kyle Larson won. Danny Suarez won. I saw something about him earlier. Now he’s really making it.’ I think it’s incumbent upon us to showcase as many drivers as we can. Some are going to have that breakout moment, and some aren’t, and that’s OK with us, because if we’re investing time and resources in drivers across a wide swath, then many of those are going to pan out. We want fans to know about those guys and gals.”

Other topics discussed by Gregory on the podcast:

–On being one of three female CMOs in major professional sports (the NBA and NFL have women in similar roles);

–How NASCAR is marketing the 2016 Chase for the Sprint Cup with drivers as action-movie heroes;

–The challenges of engaging fans and deciding which social media platforms are most effective;

–The necessity of occasionally using drivers in some uncomfortable or unfortunate moments to promote drama.

Here are time cues for easy references while listening: 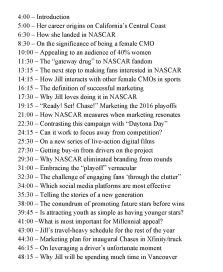