After 26 races, a week of media interviews and two days of practice, the Chase finally begins with today’s Teenage Mutant Ninja Turtles 400 at Chicagoland Speedway.

Reigning champion Kyle Busch starts on the pole after qualifying was canceled by rain Friday. Sixteen drivers remain with a shot at the championship. The field will be cut in each of three rounds until four are left for the crown in Miami.

Here’s all the info for today’s race:

START: Greg Cipes, voice of Michelangelo, Teenage Mutant Ninja Turtles and The Kids of NASCAR, will give the command start engines at 2:37 p.m. The green flag is set for 2:46 p.m.

NATIONAL ANTHEM: Jim Cornelison will perform the anthem at 2:31 p.m.

TV/RADIO: NBCSN will broadcast the race with its coverage beginning at 1:30 p.m. with NASCAR America, followed by Countdown to Green at 2 p.m. and race coverage at 2:30 p.m. Motor Racing Network’s radio broadcast begins at 1:30 p.m. and also can be heard at mrn.com. SiriusXM NASCAR Radio will have MRN’s broadcast.

FORECAST: The wunderground.com site predicts a temperature of 78 degrees at race time with a 0 percent chance of rain at the start of the race.

LAST TIME: Denny Hamlin, running 23rd at the time, spun to avoid AJ Allmendinger‘s spinning car on the second lap and came back to win. Carl Edwards finished second with Kurt Busch third. Kevin Harvick and Jimmie Johnson made contact off a Lap 135 restart with Harvick leading. That caused Harvick to have a tire rub and he spun a few laps later. Harvick later expressed his displeasure by shoving Johnson in the motorhome lot after Johnson approached to discuss the contact. 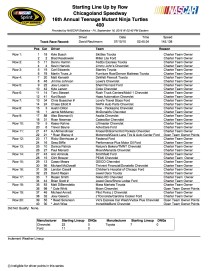