It took him 51 tries, but Spencer Gallagher finally achieved one of his two biggest career goals on Friday at Chicagoland Speedway.

“Finally got it done, it’s a great feeling,” Gallagher told Fox Sports 1 of his No. 1 qualifying achievement. “Looking to take our Lavender Missile, get out there and finish what we started.”

John Wes Townley will start on the outside of the front row in the 32-truck field with a qualifying speed of 175.896 mph.

Matt Tifft, who is making his first appearance in any race vehicle since May – and after undergoing surgery to remove a brain tumor in early July – qualified 11th (174.984).

Here’s how Truck qualifying played out: 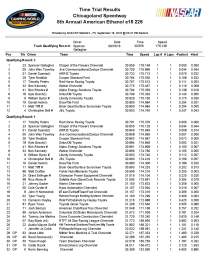