Busch’s 46th career win in the Truck Series — and his fifth Truck win in six career starts at the 1.5-mile track — added to his early-season triumph at Martinsville. Busch also finished second at Charlotte and 30th at Kentucky. Friday’s race is slated to be Busch’s final Truck race of the season.

“This has just been a really good place for us and (Kyle Busch Motorsports) over the years,” Busch told Fox Sports 1 about his success at Chicagoland Speedway. “It was 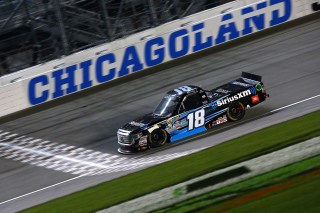 nice to come out and keep it going.

“It’s really important to see the 9 (William Byron) and 4 (Christopher Bell) make the Chase for KBM, so we have two opportunities to go after the championship.”

Several drivers who needed a win to make the Truck Series’ inaugural Chase fell short when the seven-race playoff begins next Saturday at New Hampshire.

MISSED THE CHASE: Among the drivers who failed to earn a win that would have put them in the playoffs: Cole Custer, Cameron Hayley, Tyler Reddick, Ben Rhodes and pole-sitter Spencer Gallagher.

“It just sucks,” Custer said. “We had to fight from the back all the time. It’s just not our night, I guess, but we have a fast truck so we’ll have to win some races (in the Chase).”

HOW BUSCH WON: In pretty much the same formula he’s used to win many of his 46 career Truck victories, Busch had the strongest truck of the night, led the most laps (95), stayed out of trouble, kept his challengers at bay and seemed to get stronger as the laps counted down.

WHO ELSE HAD A GOOD RACE: Hemric, who came close to earning his first win of the season, and Peters were the only drivers to qualify for the Chase without winning a race. “This is huge,” Hemric said. “We thought if we could get ourselves in, we could make a serious run for the championship. Now it’s time to go to work.” … Even though he fell short of the Chase, Hayley finished third in a KBM truck.

WHO HAD A BAD RACE: Points leader William Byron had a rough start, wrecking just three laps into the event. He returned late in the race to finish 30th. … On Lap 112, Ben Kennedy made contact with teammate Johnny Sauter, triggering a crash that also collected Matt Crafton and Ben Rhodes. The race was red flagged for 14 minutes because a section of SAFER Barrier was repaired. “I just got loose and I didn’t mean to do it,” Sauter said over the team radio. “I’m sorry.” … Tyler Reddick saw his Chase chances end when he wrecked with John Wes Townley on Lap 144.

NOTABLE: It may not have been a win, but it likely felt like it for Matt Tifft, who made his first race start since undergoing surgery to remove a brain tumor on July 1. Tifft finished 12th. … Rico Abreu raced into the top five in the second half of the race and appeared headed for a strong finish until he wrecked on the last lap and finished 19th. … Kennedy’s right hand was wrapped after his accident. He said he would have it examined further on Saturday.

QUOTE OF THE RACE: “That’s why he’s (Kyle Busch) a Cup driver and I’m a Truck driver. I have a lot to learn from that guy. … We tried, we’re not in the Chase, but we can’t say we didn’t try.” – Third-place finisher Cameron Hayley.