Kevin Harvick starts the Chase with a 34 percent probability of being the 2016 champion.

Just like last year, with the help of Andrew Maness from the racing analytics firm Pit Rho, we ran the numbers to show every driver’s shot of moving through each round of the Chase. As usual, the mathematical model was designed by both Maness and myself, taking into account past driver performance to predict future results. By running 100,000 simulations of how the rest of the season might play out, we can see what the most likely outcomes are.

Technically speaking, every one of the 16 drivers has a chance of winning the title. Even that 0.0 for Chris Buescher is actually 0.016 percent. That means if he ran his 10 best races, while everybody else ran less than their 10 best, he could pull off the upset. 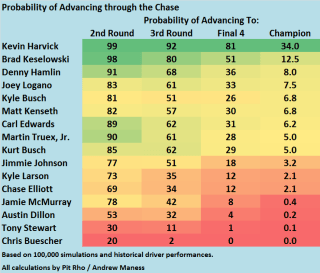 At the top of the list, you see the usual culprits, like Harvick, Brad Keselowski, and Denny Hamlin. Remember that the Chase sets up weird incentives: You need to win or at least run consistently to move through the rounds. And making it through the rounds isn’t the same as winning the title.

Notice the difference between Kyle Busch and Jamie McMurray. They have very similar chances of advancing to the second round (Busch at 81 percent and McMurray at 78 percent). But Busch has a real solid shot at winning the title (6.8 percent) while McMurray’s is much closer to zero.

That’s because we know Busch can win races, but he also could blow up at any time. We can’t trust Busch to guarantee a second round spot, but if he does make it, then all of a sudden he could get hot and win it all. Busch only has the ninth-best chance of making it past round one, yet he has the fifth-best chance of winning the title. That’s the uncertainty I’m talking about.

Martin Truex Jr. is the opposite. He has a 90 percent chance of making it past the first round, but only a five percent title chance. He’s a consistent driver in the top 10 but has trouble sealing the deal on winning races. Notice his 90 percent chance to make the second round is almost the same as Denny Hamlin’s chance, but they have significant differences in their title shots.

This year’s loss of Jeff Gordon and Dale Earnhardt Jr. from the Chase has opened the door for fresher names to make it in, like Chip Ganassi’s Kyle Larson.

“If you had asked me in April, there’s no way that I would have predicted that both Ganassi cars would be running so well at this point in the season,” said Dr. Josh Browne, a former NASCAR race engineer and now co-founder at Pit Rho. “It’s a remarkable turnaround in such a short period of time. The model seems to capture this, and we give both cars a good chance of making it to the next round.”

Of course, you have to remember that these numbers are good for this week and this week only. As soon as the next race is completed, new performance results will change the data. As we know, 15 drivers are eventually going to see their title hopes dwindle away to zero by November.