There is a common thread that ties the efforts together – a corporate savvy that aligns companies with clients.

“I felt KHI was really good at bringing in new sponsors, cultivating them and watching them get bigger,” DeLana Harvick, wife of 2014 Kevin Harvick, said on a NASCAR on NBC podcast episode that was released Wednesday. “What if we take those skills and transfer them over?

“What we did really well as a race team, we’re just transitioning that into the management side.’

During the podcast, DeLana Harvick explains how the company she co-founded with her husband nearly 15 years ago shifted directions when the couple decided to start a family five years ago. Despite enjoying the most successful years of his career since joining Stewart-Haas-Racing in 2014, Kevin Harvick remains an active influence on the brainstorming sessions at KHI Management.

“He’s like the Tasmanian devil,” DeLana Harvick said. “We’ll have these meetings, and he’ll come in and throw out these ideas, and we’ll be like, ‘Damn, why didn’t we think about that?’

“He didn’t grow up with money. He had to scrimp and save to get to race. He knew he had to have sponsors and had to work on the race car. So from an early age, he was very self-motivated. I won’t tell you he can do anything. He’s more of a big-picture thinker. He can’t do specific things really well. He’s a visionary in terms of how he envisions things.”

In the episode, DeLana Harvick also discusses how home life balances her husband’s competitive fire, details the challenges of raising their son, Keelan, in the age of social media and answers Twitter questions.

Here are time cues for easy referencing when listening to the podcast: 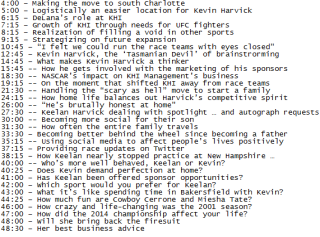