All but one seat are filled at this point: the No. 7 Chevrolet owned by Bobby Dotter. While the preliminary list also has a “TBD” associated with the No. 11 Toyota owned by Tom Deloach, Red Horse Racing announced late Monday that Matt Tifft will make his first race start since undergoing brain surgery in June.

This will be the eighth Camping World Truck Series race held at the 1.5-mile Chicagoland Speedway. John Hunter Nemechek is the defending winner. Kyle Busch has won four of the previous seven Truck races at CLS. 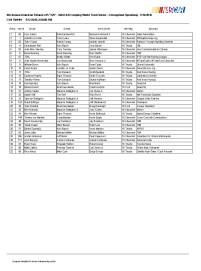